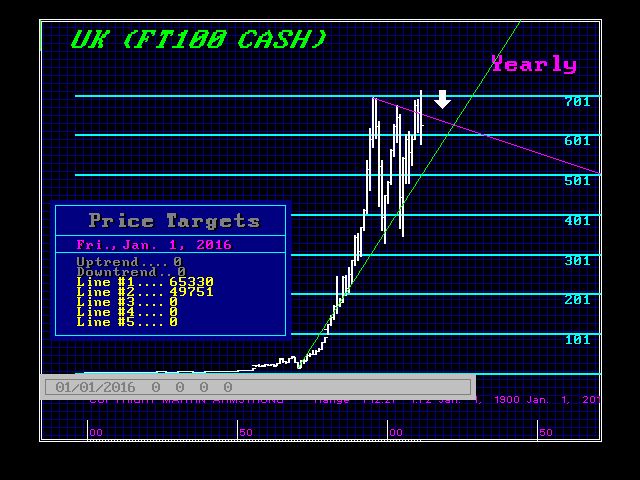 The FTSE share market index for London has long reflected the problem with the EU. Despite the lies and propaganda that the EU has been some great miracle for Britain, the low in the FTSE took place in 1974. There was a fierce bear market in the FTSE that fell into a sharp low AFTER joining the EU. This reflects more regulation and the oppressive external government imposed upon the British. It was actually Margaret Thatcher who reversed the fortunes for Britain, and we see the share market exploded with her economic reforms, but that would be stopped by Tony Blair. The rally that unfolded in the FTSE lasted for 25 years until 1999. That is when Gordon Brown sold the British gold reserves. Tony Blair became Prime Minister in 1997 until 2007. That shift to Labour resulted in the stagnation of the British economy that was reflected within the price action of the FTSE, which has never been able to close higher than it did in 1999.

The FTSE made a new intraday high in 2015, however, it has not been able to close above the 1999 high for the past 17 years. These two 8.6-year cycle durations warn that we should begin to breakout to the upside during this next cycle, but why is the real question. The answer brings into focus the primary mover behind such a rally. This implies that the pound will FALL sharply. That may indeed be the result of Britain surrendering its independence to be ruled by the EU where it has lost 72 objections every time so far. The FTSE will rally as the only domestic means of a hedge against the government. The stock market will rise simply because people will park money in equity rather than banks or trust the currency. If Britain does not leave the EU, its currency will collapse as will the euro.

The EU even stole the British waters away from their fisherman. Continental Europe has looked down upon Britain in every private meeting I have ever had. Britain has been seen as an outsider, and resentment has run rather deep simply because English became the main language in world commerce. Even in air traffic control, pilots flying internationally must speak English.

We can see the technical resistance stands at 65330 and technical support lies at 49751. This pattern is a holding pattern of stagnation. It has reflected the overall economic decline Britain has endured ever since joining the EU back in 1973.

There is little hope that Britain can be saved from the EU. The vote is likely to be fixed, because if Britain left, the EU would collapse. There is far too much at stake for career politicians. In such conditions, there is no limit to their machinations behind the curtain. I will reveal some of that this week as we approach Britain’s final hour of independence.

« Battle of the Thames Singer tries to Invade Economics
Is it Time to Kill the British Pound? »