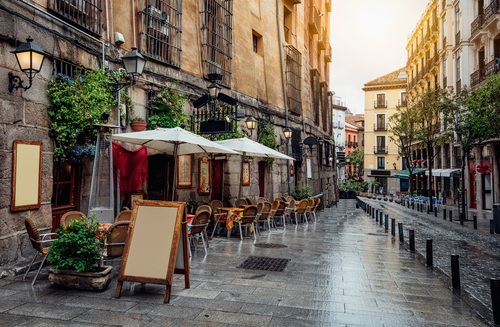 From Anonymous in Spain:

After more than a month of the strictest possible lockdown, it just keeps being extended… they are conditioning the masses to accept that no return to normal life will be possible until everyone is vaccinated (and, thankfully, the mankind loving Bill Gates is fast developing a vaccine – yay!). Now, while many countries in Europe have lockdowns and closed shops & schools, in Spain it’s completely prohibited for people to even leave home except to go to the nearest supermarket or pharmacy (or to work for those in the few sectors that are allowed to operate).

In some towns, you’re only allowed to go to the supermarket once a week and/or your minimum purchase must be 30 euros. Oh, and supermarkets have drastically cut their opening hours while also canceling home deliveries during the lockdown. As a result, and given that only one person is allowed to enter at a time, there are typically long lines of people (often covering a couple of blocks) waiting to be able to enter the store. How does any of this make any sense? It’s just another insane and counterproductive measure that only serves to condition people and get them used to obey the regime without questioning anything.

Police (and in many areas also the military) patrol the virtually deserted streets and harass anyone who can’t produce proof of why they’re out. The fines are absolutely insane, and when someone is caught out for the second time they can face jail (there have already been people jailed for this in the last week or two). The police are now also using drones to catch people who might venture out to stretch their legs and breathe some fresh air.

It’s not only illegal, under this tyrannical government decree, to go out for a short walk, but it’s also not even permitted for children to go out at all. I have no idea how there haven’t yet been many more tragedies and crimes within families who are locked in in their homes (often very small apartments) 24/7, for months on end, with children of all ages. It’s mental torture for everyone, but I can’t even begin to imagine the long term damage this will do to the kids who need to be able to go out and run around for at least a short period of time each day. Italy, the only other country with as tyrannical a lockdown as Spain, at least permits a parent to take their young kid(s) outside once a day.

The economy has of course been completely destroyed, and most of the small businesses (which is the vast majority of businesses in southern Europe) will never reopen. The tourism and hospitality sector, which is a huge part of their economy, has no hope in hell of recovering. Strangely enough, nobody here seems to be thinking about this… they’re still fully immersed in the panic about the fake “pandemic”.

Yeah, I know, there are the 24/7 MSM headlines counting the alleged corona deaths and infections, and telling people how millions will die if anything gets reopened and people are allowed to leave home. Nevertheless, there’s a lot more skepticism about all this in other countries (US, UK, Germany, etc), so it’s amazing to see just how completely brainwashed the Spanish are, and how they totally trust the media and their Marxist government. When there is any criticism of the government, it’s because – according to the people – the government is still not doing enough to prevent people from dying from the “pandemic.” I suppose they should also make it illegal to go grocery shopping; then everyone will just starve to death and the virus will be defeated.

The government is talking about introducing a Universal Basic Income (UBI), which makes sense from their point of view, because with never seen unemployment rates (and a large share of the population not having any prospect of finding a job), people could perhaps eventually revolt once they’re starving. (I say could because I’m not so sure they would revolt even then… most Europeans seem to be plagued by a suicidal death-wish, and not just since 2020.)

In any case, UBI would prevent that, and the masses would not dare to say (much less do) anything against a government that is providing their daily bread. Actually, their idea is that Germany should be paying for it all. Every day the Spanish government and the press are demanding that the EU cough up more money for Spain and Italy, and they always blame evil Germany (and the Netherlands) for denying them what they see as their right. So, Spain and Italy have deliberately destroyed their entire economies, and now Germany etc have an obligation and duty to pay for it all. You couldn’t make this shit up!

It’s a known fact that Italy and Spain are counting all the dead who happened to also have a coronavirus (or pretty much any flu-like symptoms) as having died from this virus. Which is a total fraud, of course. Other countries are doing it to some extent too, but at least there have been many doctors in places like the US, Germany, and others coming out and denouncing this. Meanwhile, I have not seen or heard a single voice here telling the truth about any of this.

Doctors, nurses, health “experts” etc are out there lying unashamedly, and nobody in this country seems to have the least integrity to call them out. I know a person who went to one of the hospitals that was supposedly overflowing, and there was nobody there, no chaos, barely any people, staff calm and not busy at all, etc. ie., the same fraud as with the hospitals in the US and elsewhere. Hey, perhaps they’re all determined to continue with this charade until Germany gives in on coronabonds!

As far as the masses here… what more can I say? They are calling the cops and military (i.e. the regime goons out to punish anyone who wants to breathe fresh air for a few minutes) “heroes” and the approval rates of what these thugs are doing are something like 95%. And they’re even more enamored with their medical “heroes”, clapping and cheering from their windows every evening at 8pm to show their support – yeah, the same “heroes” manufacturing fraudulent death numbers, lying about death rates and overflowing hospitals, making this unexceptional flu to be the new Black Death, and demanding that strict lockdown be kept pretty much indefinitely (or until everyone is vaccinated).

It is telling that when so many doctors and epidemiologists in other countries have been coming out to denounce these lies, no such thing has happened here. In fact, none of the actual data and foreign doctors’ statements have even been published here, much like the fact that countries that did not impose any lockdowns whatsoever (i.e. Sweden, Belarus, etc) have actually fared much better or no worse than those with strict lockdowns. Nobody here seems to know about these things, and when you send them the information, they dismiss it or get upset and accuse you of wanting to kill their elderly.

It’s scary to see how an entire country has fallen for the (by now totally disproved) lies and propaganda. They are not only willfully supporting the worst kind of tyranny but are actively calling for more of it. Back in communism in Eastern Europe people did what they had to do to survive but they didn’t actually believe the regime propaganda. So, for instance, people participated in the parades in support of communism once or twice a year, but only because it was mandatory. Well, here they’re doing it voluntarily and from their own initiative – clapping and cheering in support of their jailers every day (and calling the cops on people they see out on the street, or denouncing a neighbor who dared to go to the supermarket twice in a day, etc).

I don’t know whether this totalitarian police state tyranny we’re now seeing in a large part of the world is just a test run or the real thing. I suppose if they complete the few steps still missing (such as abolition of cash, forced vaccination/chipping, etc) within the next 6-12 months, the global NWO tyranny and mass enslavement will be a done deal. Even if it’s a test run, I doubt we’ll get any of our basic freedoms back. Those “temporary” measures are never scaled back once a manufactured crisis is over.