The Polish Election – Really No Surprise 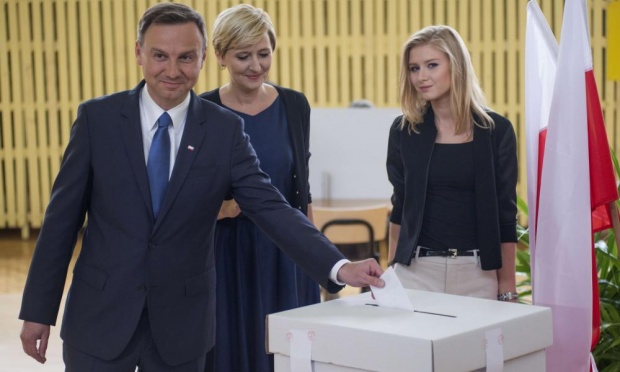 Polish President, Bronislaw Komorowski, 62, conceded defeat to conservative challenger Andrzej Duda, 43, shown above voting in the Sunday’s presidential election with his wife and daughter. This is reflecting the shift in politics that our computer has been forecasting for this period going into 2017 on a global scale (including the USA) for 2016.

Duda seems to have won in a 53% to 47% vote. At first, it looked as if Duda did not have a chance, but closer to the election the public was starting to call it neck-and-neck. To me, it was no surprise after talking to people in Warsaw and Krakow. No doubt, this is sending yet another warning that Brussels is out of touch with the rising discontent in Europe. Poland has retained the zloty, not yet adopting the euro. The presidential result is setting off shock waves in Poland, which will ring the alarm bells for government, whom faces their own election later this year.

Originally, Komorowski seemed unbeatable. Yet we are facing a generational shift that comes with changing attitudes. We saw this in Scotland, where the youth are now wanting out of the UK, as well as in Spain, Greece, and Italy. There is a desire among young voters for new faces and new ideas. They are very much a part of Poland’s newfound prosperity, as many U.S. companies move their back offices to Poland, for they have an educated workforce that is well versed in English.

Duda’s victory marks the first major electoral win in almost a decade for his party, the opposition Law and Justice Party. This is illustrating the change in generational shifts that is upon us, and we may see this in the 2016 election in the USA. Despite the piles of money for Hillary from Wall Street, what the pundits may not be considering is the generational shift that wants to see new faces.

Duda, regarded as socially conservative, is close to the Catholic Church. This has some likening to him as a Catholic, but what so many people do not realize is that even in China, you cannot show films that even depict divorce. The markers view Duda as less business-friendly than the governing Civic Platform. This resulted in a 1% drop in zloty, but the youth employment depends upon friendly relations with business and the importation of jobs.