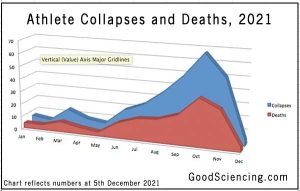 The pinnacle of health, athletes seem to have an edge over the rest of society. Their grueling workout and nutrition programs, mixed with natural genetic athleticism, puts them ahead of others in the natural immunity category. So why are young athletes suddenly collapsing and/or dying from heart complications?

The sports world has mostly mandated vaccines and athletes have been forced to either abandon their careers or get the jab. Since the COVID vaccines became available, nearly 300 athletes have experienced cardiac arrest and over 167 have died. Something is wrong.

The American Journal of Roentgenology published an article on cases of myocarditis (i.e., heart inflammation) among athletes who received the vaccination. Dr. Lydia Chelala of the University of Chicago Medicine and her team acknowledged that heart issues “in adolescents and young adults after COVID-19 mRNA vaccination have [been reported].” Since diagnosing myocarditis is largely based on patients displaying symptoms, the ailment can be harder to detect in otherwise healthy young adults. “A study in young athletes with confirmed COVID-19 showed that a substantial proportion of individuals had subclinical myocarditis on screening cardiac MRI,” they noted. “Subclinical myocarditis may also be possible after COVID-19 vaccination … To better understand a possible association, the CDC has encouraged further investigation of myocarditis following COVID-19 mRNA vaccination,” the study stated.

Without going so far as to suggest requiring MRI scans after vaccination (a very expensive option in the US), the researchers urged healthcare providers to “recognize the role of cardiac MRI in the assessment of patients with suspected myocarditis after COVID-19 vaccination.”

Good Sciencing compiled the following list to honor athletes who have lost their lives due to forced vaccinations:

Repeat This After Reading Each Line