Washington D.C. on the 1918 Spanish Influenza 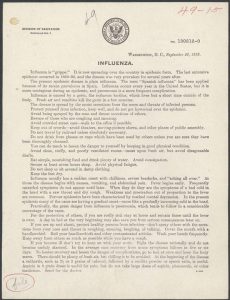 The document above was issued by Washington D.C. on September 26, 1918, in response to the Spanish flu. This was before the Build Back Better agenda; Big Pharma was not an all-powerful entity capable of buying any politician. The government was not causing hysteria or imposing tyranny to combat a virus, and the advice provided remains solid advice today.

The public document states that the virus circulates every year in the US but is “more contagious during an epidemic, and pneumonia is a more frequent complication.” It explicitly states: “do not get hysterical over the epidemic.” That is the opposite of what they want for the people today. The government in 1918 admitted the virus only lasted a short time outside of the body and suggested that people avoid those who are sick or having sick persons directly sneeze or cough on them (seems very fair). Wash your hands, stay home if you are sick, sleep and eat well. Fresh air helps. “Fight the disease rationally and do not become unduly alarmed.”

Of course, the drugs calomel and Phenacetin were later withdrawn but it has been suggested that most of the deaths actually were caused by Asprin poisoning, not the flu. Will the future revision of this period also attribute deaths to the vaccines lowering immunity?

The point here is that in 1918 they tried to prevent panic whereas here, they are deliberately creating one.