The Effects of Masks on Children 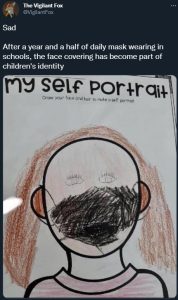 COMMENT: My nephews and nieces go to school in New Jersey where masks are required. If they sneeze or cough, they’re required to take numerous corona tests before returning to school. One of their schools required two negative tests despite the children contracting corona at school two months prior! We were walking into a crowded store the other day and my nephew became uneasy and put on his mask. He said he was afraid to quarantine again. The girls have never attended school without a mask. Governor Murphy deserves no praise.

REPLY: The damage to the children has already been done. Democratic Governor Murphy announced plans on Monday to repeal school mask mandates. His decision will not go into effect immediately, but rather he will wait until March 7. This is a strategic move to make Biden look good for his next State of the Union Address on March 1 where his handlers will be forced to allow him to speak. I am sure he will use this as a talking point to show how well his administration has handled the coronavirus. Critics have accused Murphy of ending the mandate for political gain. “March 7 is an arbitrary date that doesn’t have scientific backing,” state Assemblyman Christopher DePhillips, R-Bergen, said. “Why not end the mandate and all of the issues that go along with it today?”

The Centers for Disease Control and Prevention (CDC) admitted that cloth masks are not effective. There is no medical reason for children to wear masks all day at school or at all for that matter. Around two-thirds of American schools require mask mandates. The World Health Organization does not recommend masks for children under 5, and Europe’s version of the CDC does not recommend masks for children under 12. Yet, the US has been muzzling children over the age of 2 for years.

The damage has been done. Teachers have come out and said that small children have been having a harder time with speech and being understood. Studies have occurred that show children have trouble identifying faces and emotions due to masks. If the powers that be have managed to scare a large percentage of the world’s adults, one must wonder what they have done to the youth, some who don’t know life outside of COVID restrictions.