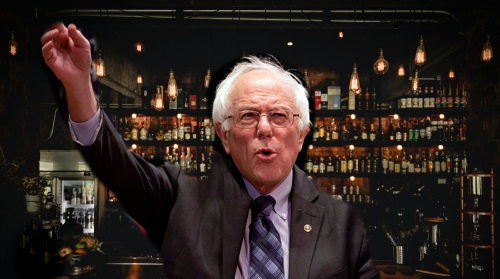 COMMENT: I think this is being used by socialists to justify complete government control. They criticize Trump saying he did not act soon enough. I just do not understand that these people think the government should protect us from everything. The person I was talking to was a teacher. They think everyone cares too much about money. They are really naive. If people do not work they can’t pay taxes and then what? I do not understand their reasoning. Over 38,000 people die in car crashes every year. So using their logic, we should all give up our cars and just stay in our houses and never leave. They are getting really scary.

REPLY: The joke is Bernie Sanders walks into a bar and yells, “Free drinks for everyone!” The bartender asks, “Who’s buying?” Bernie says, “Well it’s obviously the guy who has the most money!” The crowd cheers! “That’s you Bernie! We are all unemployed because of the coronavirus!”

You are right, government workers do not understand the economy. They think Trump only cares about money and the rich. But it is the people in the private sector who pay the taxes that support their lifestyle — not just the rich. They see the world only through their eyes and believe the government has endless pockets. They have 100% job security because the government just raises taxes when it needs more money and they’ll throw you in prison if you refuse to pay.

What is really interesting is that by shutting down the economy, people will lose jobs, small businesses will cease to exist, unemployment will rise, tax revenue will decline, and then the very people pushing this panic inside the government will suddenly lose their pensions. That may be the only poetic justice coming out of this mess.

« Grab for Dictatorial Powers Using Coronavirus
PRIVATE BLOG – When Will it End? »