Protests Against Lockdown in Berlin 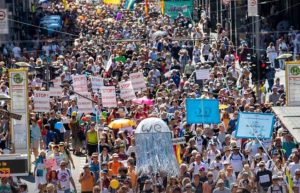 Nearly 20,000 protested in Berlin over the weekend against the lockdown and arguing that masks make them slaves. Many have ignored wearing masks and physical distancing as they accused the government of “stealing our freedom“. The press is clearly part of this conspiracy against the people for they are reporting the rise in cases that only reflects herd immunity and not deaths. With the flu, which they totally ignore, for even the CDC states that 44,802,629 Americans had the flu in the 2017-2018 season. Reporting mere thousands with this virus and blowing it up into something that has terrified many and make it seem as if you will face certain death is just outrageous. There should be a class-action lawsuit brought against the media for deliberately not reporting the truth.

« The Elitists Are Risking their Lives to Maintain Lockdowns
Why is Fauci Not in Prison? »