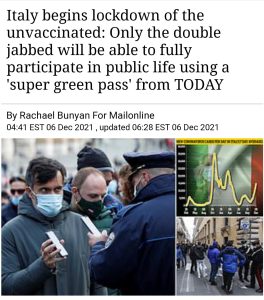 Italy is now among the growing list of countries that refuses to allow unvaccinated individuals to participate in society. Italians must provide a Super Green Pass that shows proof of vaccination or recovery from COVID within the past six months. Those without the Super Green Pass will be banned from entering restaurants, gyms, bars, hotels, movie theaters, music venues, sporting events, and more. Although the restrictions are supposed to end in mid-January, there is a good chance the “precautions” will be extended.

Italy initially introduced the Green Pass in August that placed certain limitations on the unvaccinated, and those restrictions were later extended. The Super Green Pass is only valid for nine months, upon which adults and children must be subjected to the vaccine again. Prime Minister Mario Draghi hails these measures as the method to saving Christmas. “Our thoughts are of the dead, the fall in economic activity by 109 percent, the closed businesses, the children out of school,” Draghi stated. Economic activity is down 109% due to the laws that are continually imposed on society to prevent a mostly non-life-threatening virus.