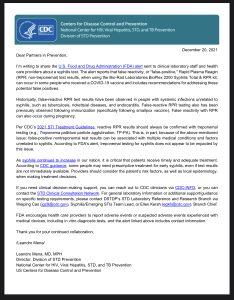 The US Food and Drug Administration (FDA) has admitted that people who received the COVID-19 vaccine are falsely testing positive for syphilis. “More research is underway to determine the extent of the issue. It is not known if other RPR tests may be affected similarly. Treponemal testing for syphilis such as Treponema pallidum particle agglutination (TP-PA) and treponemal immunoassays do not appear to be impacted by this issue,” the FDA said.

“False-reactive RPR testing also have been previously observed following immunization (specifically following smallpox vaccine),” a member of the CDC reported. The CDC member also stated that “false-reactive RPR test results have been observed in people with systemic infections unrelated to syphilis.” Could the protein spike from the mRNA vaccine be the culprit? Although health institutions claimed that the body would stop producing spike proteins within weeks, the FDA has admitted that is inaccurate. “Based on information provided by the manufacturer, Bio-Rad Laboratories, RPR false reactivity was observed in some individuals for at least five months following a COVID-19 vaccination.” The vaccine manufacturers owe it to the public to release what is in these vaccines.