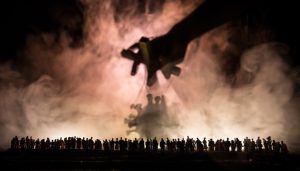 The lockdown in Shanghai has caused immeasurable damage to the people and battered an already stunted global supply chain. The wealthy are now fleeing the city, as numerous agencies have reported a large uptick in immigration requests. The Financial Times reported a 7-fold increase in the search term “immigration” among residents.

The media has downplayed this story as they do not want the people to remember governments’ capabilities. As with the fall of many great cities, the wealthy are the first to leave. Shanghai may be one of the richest cities in China, but it is not immune to government tyranny.

Only 25 deaths in Shanghai were attributed to the coronavirus, but over 25 million people directly suffered from this lockdown. The lockdown was not about safety. Warehouses are beginning to open, but the world’s largest port ceased operations. Again, no world leaders commented heavily on these major issues.

Pets of the “infected” were eliminated by the government. There were reports of people jumping from high rises and others begging the police to take them to jail with the hope of having a meal. No world leaders have commented on these human rights abuses as they were done in the name of COVID.