With a total debt of almost 250% of GDP, China’s debt problems are well known. Meanwhile, the government is working on resolving the issue by following the playbook of US investment banks and creating securities structures to offload bad debt (remember CDOs?). The slowing economy has caused rising defaults. Analysts suspect the NPLs ratio to be 30% of bank loan portfolios versus the official ratio of 1.81% as of the end of June 2016.

The corporate bond market is also feeling pressure as 41 companies have defaulted on R25.4bn of bonds since the beginning of the year. In an effort to restore confidence in the banking sector, Bank of China and China Merchants Bank sold off some of its NPLs as securitized products. It seems like an asset swap to other banks with 50-60% of the book being sold to other banks. Furthermore, 95% of the riskiest tranches were sold to a state-owned asset manager. Meanwhile, in an effort to support growth, the Chinese government is promoting lending to small and micro businesses, which carries higher risk and reduces peer-to-peer lending.

Corporate debt is estimated at 145% of GDP with the non-financial state-owned enterprises representing half of the bank credit. Chinese banks have a greater concentration of individual customers with the top customer of Agriculture of China accounting for 7% of its loan book and the top 10 customers comprising 17% of its loan book. 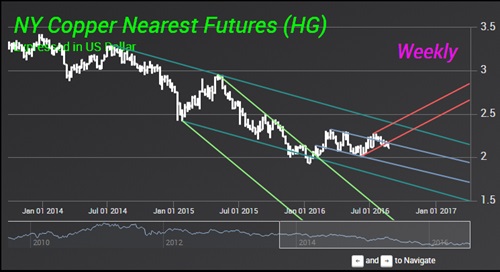 Chinese credit is currently growing at 2x GDP, meanwhile, fixed capital investment growth slowed to 3% during 2015. Watch copper that is used for loan collateral in China and has recently broken weekly technical support with a Directional Change during August and the next turning point in October. A breach of the $2.00 level will indicate further lows.

Financial Capitol of the World & Its Migration »