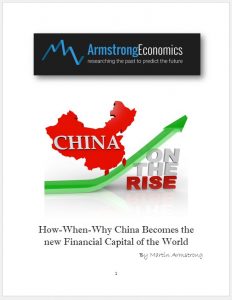 QUESTION: Dear Marty,
Thank you for the excellent source of information. Just to let you know I am a big fan of cycles.
Previously you predict China will rise and become the financial capital of the world in the 2030s. However, most communist parties do not survive in the past 75 years. Does the Chinese population need to rise up and get rid of the CCP before China can become the financial capital of the world? If yes during that turmoil, what kind of dire impact will it have on the world, especially EMs?
Looking forward to your answers.

ANSWER: Although China claims to be a Communist Party, they are by no means a Communist government. They are more of a hybrid where the leaders are still party members but they do not have to stand for election. Therefore, they do not need to make fake promises as we have in the West.

This hybrid system is much more reliable insofar as it can actually make strategic plans for the long-term. In the West, we have elections and the political parties are so antagonistic with each other that the economic business cycle is being accelerated in amplitude, which means we get more volatility. From a national growth perspective, China’s extraordinary rise to the #2 economy in the world demonstrates the effective benefits of such a system compared to our system of political rivalry. 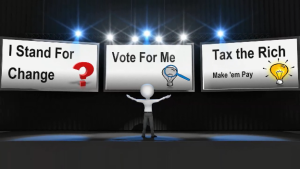 The only way to fix our system is to outlaw socialism where they promise to rob other people’s money. Ancient Rome had social programs without class warfare. We have to end this conflict that prevents economic long-term growth.