The Canadian Government Could Confiscate Your Pet 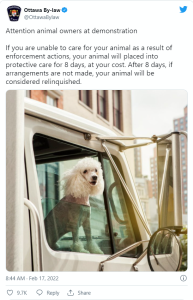 In a new low for democracy, the Ottawa By-law enforcement agency made it clear that they are not above confiscating pets to quell to the protests. “Attention animal owners at [the] demonstration: If you are unable to care for your animal as a result of enforcement actions, your animal will [be] placed into protective care for 8 days, at your cost. After 8 days, if arrangements are not made, your animal will be considered relinquished,” the tweet read.

This means that if a Canadian is arrested for exercising their legal right to protest, the government could seize their pet as they await trial behind bars. The internet is ablaze with angry questions demanding to know what “relinquished” entails. Do they plan to kill these innocent pets? First, Fauci tortured beagle puppies, and now Ottawa is ready to confiscate pets. Did Klaus seek out the cruelest people humanity has to offer to push his agenda forward?

Pets become part of the family. Truckers on long-haul commutes often have a dog for companionship, and once the Canadian government is facing a mob of irate truckers whose beloved pets were seized, they’re going to have a much bigger problem on their hands.