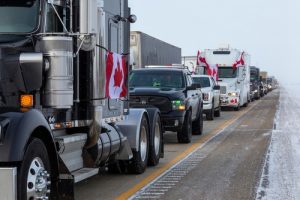 The truckers are still going strong in Canada and fighting for ALL of us. Trudeau’s Administration has no empathy and does not understand why anyone would want to interfere with the tyrannical plans of Schwab’s groomed young leader.

Ottawa police are now saying that it would take 1,800 police officers to end the protest. Chief Peter Sloly stated “there are no days off” for officers as the government continues to employ them around the clock. The protests have been peaceful and met with support from the local community.

Justin Trudeau is still in the fetal position somewhere, unwilling to meet with the protestors. A few days ago, the missing prime minister said that he would need to be “very, very cautious before deploying the military in situations against Canadians.” Deploying the military is not on the agenda right now, as it would elevate the situation to disastrous proportions and many military members likely support their fellow citizens. 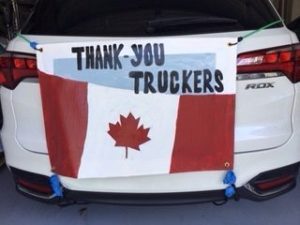 They cannot simply tow thousands of trucks from Ottawa. The trucks are equipped with air brakes that will lock all 18 wheels once implemented, and at that point very little could move the truck. CBC interviewed numerous trucking companies for their perspective but was told that most towing companies refuse to remove trucks and risk damaging their relationship with trucking companies. The tow companies could technically “cage” the breaks by manually removing the break from each individual wheel, but that is still difficult to do without the consent of the driver. It is also a timely endeavor. In one example, it took 18 hours to remove 30 trucks and 28 cars.

In the end, even if they spend countless tax dollars to remove the trucks, the trucks can simply return. And they will return. People are passionate about this movement and it is not likely to quell until Justin Trudeau addresses the people and their pleas to remove mandates.

« The Truckers have Struck a Blow Deep into the Politics of Canada
Will Trudeau Fall? »