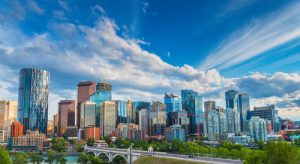 The environmentalists have really gutted Alberta which was an economy based upon commodities. With that industry under assault, the economy has been decline. According to the quarterly report released April 1st 2019, Calgary’s downtown vacancy rate is currently at 26.5%, the highest in Canada. Although it decreased slightly from its peak at 27.8% in the second quarter of 2018, it still exceeds the vacancy rate from the economic crisis in the 1980’s which stood at 22%. And although this has been in the 20% range for a few years now, it shows no sign of stopping soon.

Alberta’s businesses have weathered numerous fiscal storms recently; the recession due to the fall in the price of oil and decreasing property values, the introduction of carbon tax on Jan 1, 2017 with a further increase on Jan 1, 2018 and the spike in minimum wage from $10.20 to $15.00 on Oct 1 2018, but the new property tax increase takes the cake and the already thin margins of struggling businesses will be wiped out completely. Many have reached out through social media and are connecting through a Facebook page called “Sorry, Calgary is closing.”

An emergency council meeting will be taking place Monday June 10th to try to patch things up but the council of Calgary won’t be the only ones there; a massive rally will be taking place before City Hall at 7:30am in protest. Petitions are also circulating as many are calling for the province to step in immediately and remove Calgary’s council members, including Mayor Nenshi himself.

What they don’t seem to realize, is if you raise taxes enough, there won’t be any incentive to work. People will instead be driven away and go where the prospects are more opportunistic for them. Like in Vancouver where the price of gas was at an all-record high last month ($1.789 per litre or $6.772 per gallon CAD) and many drove across the border to Washington State to fill up not only their vehicle, but multiple jerrycans as well. People will
always migrate away from where the prices and taxes are outrageous and Calgary is no different.

« Will Canada Participate in the Shift from Public to Private?
Understanding Canadian Real Estate »