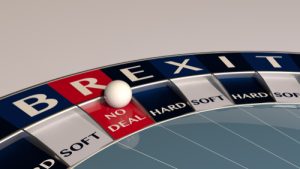 The report that paints the darkest possible scenario for Britain without ever mentioning that 60% of its trade is outside the EU and that any attempt by the EU to punish Britain will destroy the German economy which is preparing for a very deep recession since Britain is its #1 trading partner in the EU particularly for autos.

This Yellow Hammer report leak is clearly a scaremongering edition and not serious research. It is just a propaganda piece for that purpose. It claims that transport disruption will be 50%-85% of lorries travelling across the Channel may not be ready for French customs. The EU is likely to harass Brits with immigration checks at border posts. Medicine supply chain may be disrupted for up to six months across the Channel. The supply of certain types of fresh food will decrease.

The EU will slap tariffs on British fuel imports so they forecast financial losses and the closure of two refineries resulting in about 2,000 direct job losses. And as far as Northern Ireland is concerned, the UK would impose the “no new checks with limited exceptions” but they report claim this will be unsustainable.

There is no mention that trade negotiations with the rest of the world cannot take place inside the EU because any member can veto a UK trade deal with anyone.

The British pound is still under pressure as the propaganda machine is in full force. A further decline in the pound into October will far outweigh any tariffs the EU could possibly impose. Everyone looks at the dire future for Europe while they fail to look at the EU. Germany is imploding economically. The German economic philosophy has always been the old-school Mercantilist view to sell more stuff to everybody else than you buy.

While Germany is all about austerity, it has over-taxed its people and has declined to create a domestic consumer market preferring the export model which has resulted in the German people having almost the lowest net worth in Europe. While the economy is #1 inside the EU, the wealth does not pass to the people. A no-deal BREXIT will hurt the EU far more than it will hurt Britain and that is the absolute TRUTH!!!!!!!!