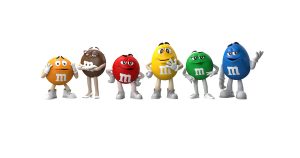 Have you ever looked at an M&M advertisement and felt underrepresented, or are you in good mental health? Mars Incorporated announced plans to redesign their M&M mascots to be more “inclusive.” These are colorful cartoon candies we are discussing. “M&M’S promises to use the power of fun to include everyone with a goal of increasing the sense of belonging for 10 million people around the world by 2025,” Mars Incorporated stated.

This is yet another example of woke marketing and pandering to the far-left who believes individuality is immoral. Mars Incorporated knows that this publicity stunt will have people talking about their candy, and in that sense it is effective. Yet, their idea for rebranding their M&M characters is so completely absurd and a sad reminder that we live in a clown world.

The sassy green M&M will swap her heels for a pair of sneakers, as being feminine is not woke unless you were born with a Y chromosome. The brown M&M, the only other female, has had her “sex appeal toned down” as well. Jane Hwang, M&M Global Vice President, has said that the orange M&M will work on his anxiety issues and learn to “embrace his true self, worries and all.” Is there something in the water at the Mars Inc. headquarters? I can only imagine the boardroom meetings over this topic.

Where is the white conservative M&M sitting in front of their computer for 12 hours with 50 tabs open? I want to feel seen (obvious sarcasm).

Woke marketing is a pathetic attempt to increase sales through division and fake empathy. There is true inclusivity and loving thy neighbor, and then there is pretending a piece of chocolate is a strong single mom (they/them) self-identifying as a non-binary pansexual whose child calls them by their first name.