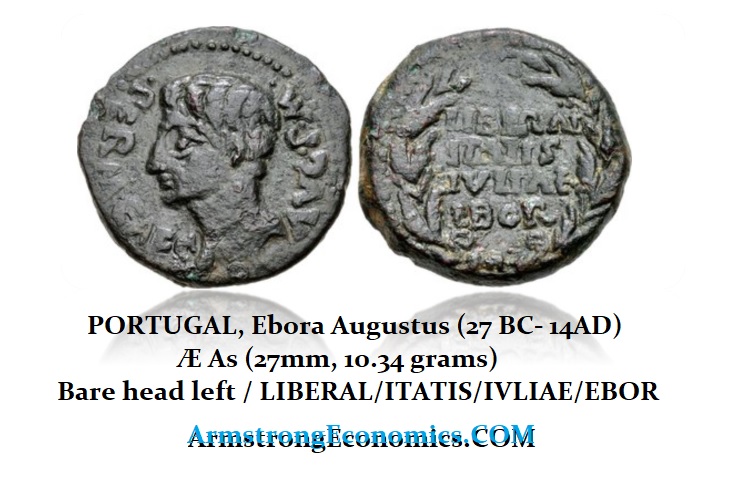 QUESTION: Can you shed any light on the history of money in Portugal. There seems to be scant discussion of this subject.

ANSWER: The first coinage of Portugal really is Roman and it appears to be struck by the first Roman Emperor Octavian/Augustus (27BC-14AD). The location of the mint was the city of Évora. Interestingly enough, the name in ancient times was Ebora, which is really Celtic which is the name of a species of tree and thus the name means “of the yew trees.” However, there is a lack of any evidence of ancient settlements prior to that of the Roman. Perhaps because any Celtic evidence lies under the city which is not accessible to archeologists.

It is generally assumed that Évora only came into being as a municipium after the Pax Romana under Octavian in 30 BC which are really the first coin evidence in the region. Yet the name implies there was Celtic activity previously. The first reference to Évora as a municipium is found in a list of cities in Hispania in the Historia Naturalis of Pliny the Elder to the year 77AD.

During the 4th and 5th centuries, the Roman mint for coinage in the Spanish/Portugees region was actually Barcino, or Barcelona. So the early coinage of Portugal appears first under Augustus and then later the coinage is all struck in Barcelonia.

In more modern times, you might be wondering where are there different references to money. There were reis and reals and gold ducketsrelate. From the 12th century, Portugal had a currency called the dinheiro (dinero). The word today means money and is taken from the Roman denarius. Real meant royal, as in a royal coin, and reis was the plural of real. 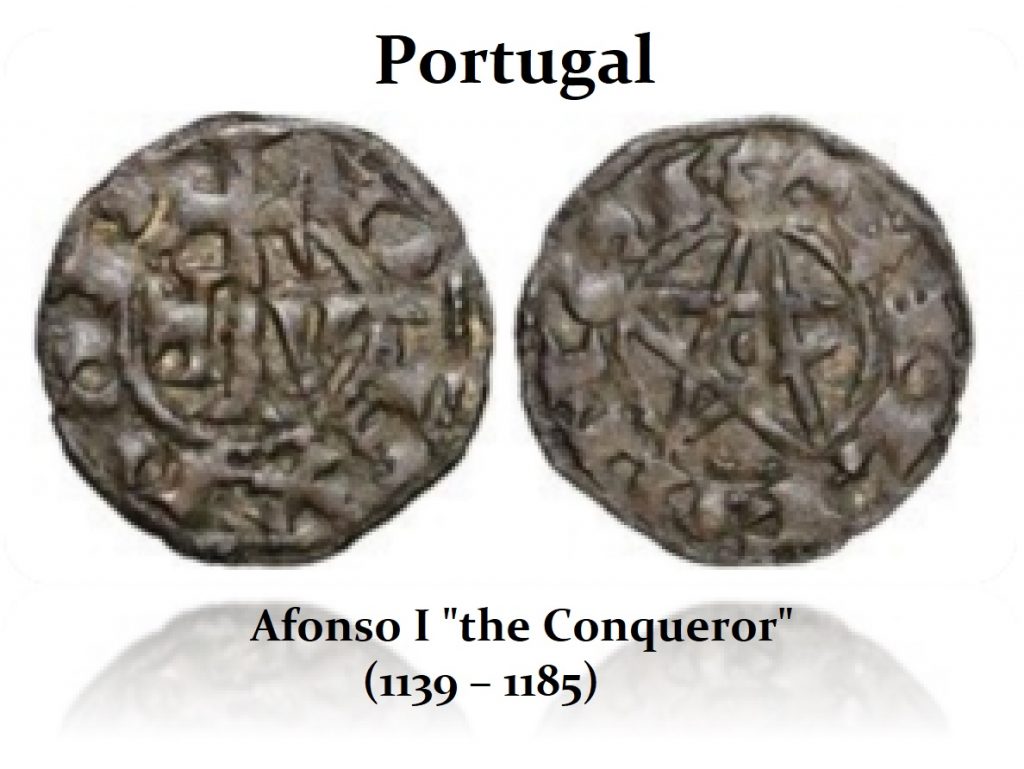 Portugal’s capital is Lisbon but it did not emerge as a nation until 1143, as a result of a rebellion by Dom Afonso Henriques (Afonso I) against his own mother Teresa of León. Portugal won its independence at the Battle of São Mamede near the town of Guimarães, in June of 1128. The first coinage of Portugal was that of Alfonso I (1139-1185) and it was a dinero.

Europe had silver mines, but not gold. Gold was found in Northern Africa and in Anatolia (modern Turkey). Portugal became prominent because it had trade links with the Arabs and imported gold for Europe. Therefore, during 15th and 16th centuries, Portugal emerged as a powerful nation and naval power. Famous explorers are Fernando Magellan (circumnavigated the world), Vasco da Gama (discovered the route to India) and Bartolomeu Dias (sailed around Africa). Portugal made many discoveries and established colonies all over the world. The most famous one is Brazil, but it also established colonies in Africa, such as Mozambique and Angola, and on other continents.

Portugal was actually the first global power and one of the biggest empires at that time and was, therefore, the Financial Capital of Europe. During a 1910 revolution, the rebellion against government erupted once again and overthrew the monarchy. For most of the next six decades, repressive governments ran the country. This led once again to civil unrest and a 1974 military coup installed broad democratic reforms. Finally, on January 1, 1986, Portugal became the eleventh member of the European Economic Community.