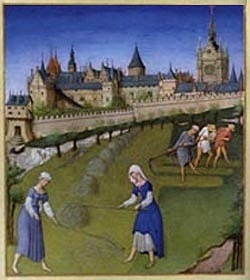 Your grasp (and evidently the computer’s) of historical forces–the Shakespearen drama of it all–is awesome.

But you seem more worried about possible socialism than neofeudalism, in which he rich take us back to the Middle Ages.

Why? And which way do you think it will go, or a third way? ANSWER: Feudalism did not take place because of the greedy rich. Government collapsed with the Roman Empire following Romulus Augustus. People abandoned their property in Rome and fled away from taxation to the suburbs. With no government, there was no rule of law. People thereby agreed to be serfs to work the land in return for security. This system lasted until the Black Death of the 14th century.

So it was not the “rich” that created the system or the collapse of government. The rich have no power or desire to compel society to accept such a system. For that to emerge, we need a Dark Age with losses of probably 50% of the population through disease/plague, and in turn the collapse of government. Then the landscape would break up into small units for safety. Major corporations would collapse for they need a coherent society to sell products.

The danger of “socialism” is stepping in the direction of communism where it is the government that consumes everything for they have the army, guns, police, whatever. Government seeks to sustain itself and thus consumes everything, which ultimately leads to revolution. The police are already moving toward being the enemy against the people by supporting the state rather than protecting the population. This was the PRECISE complaint Thomas Jefferson included in the Declaration of Independence — protecting the agents of the king with mock trials.

So the danger (ABSENT OF A DARK AGE) is we move toward a totalitarian state, and ultimately toward revolution whereby we create a real democracy for once rather than a republic that devolves into an oligarchy with career politicians. NO REPUBLIC has ever resisted the path to oligarchy and that is the real danger we face. The question becomes how far down this historical path do we go? The path is well worn. The markers are clear and never change.

A Dark Age is a control-alt-delete; reboot and start all over again. The problem: Dark Ages have existed numerous times and they tend to last 600 years. When we look at such things, it is important to dig to the foundation to reveal how such trends emerge.

« Disease Is Cyclical – It's Time We Understand the Implications
What Happens to Cash When Governments Go Electronic? »