Quebec Issued the First Paper Money in the New World 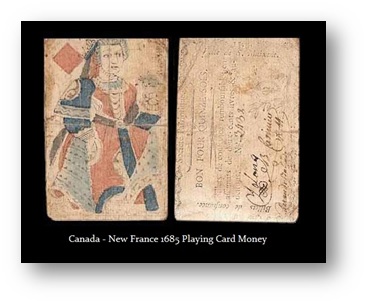 ANSWER: Ironically, the very first paper money in America was issued in Canada. In 1685, the colonial authorities in New France (Quebec) had no coin. A military expedition against the Iroquois, allies of the English, had failed and tax revenues were down as traders circumvented the taxes by dealing with the English. This predates the official first paper money issue of February 3, 1690, by the Massachusetts Bay Colony. This paper money issue was used to pay for its war in 1689 when the British demanded that Americans fight the French in Canada. Lacking coinage to pay the troops, the government issued certificates to the troops in lieu of paying them with coins.

Lacking coins, New France printed various face values on playing cards and affixed a seal to them. When the king’s ship arrived, they redeemed this “playing card money” in cash. This system was brought to an end after 1686, but it was necessary to return to it during the period 1689-1719. In 1714, card money equivalent to a value of 2 million livres was in circulation. Some cards were worth as much as 100 livres.

The king later returned to using playing card money in 1729 when the merchants demanded it due to the shortage of money. This issue of playing card money used white cards without colors. They cut or had their corners removed according to a fixed table. The whole card was worth 24 livres, which was the highest sum in playing card money. Depending on the number of corners that had been cut off, this is what determined the face value.

The first paper currency in what is now the United States was issued in 1690 in Massachusetts Bay. Because of the collapse of the Continental Currency, the United States did not issue any paper money until the Civil War. There were private bank issues which are known as broken bank note era from the 1840s. But the federal government did not issue paper money until the Civil War to fund its expenses.

« Too Big to Fail – Nothing Has Changed
Millennials Collect Sneakers not Gold? »