The USA is in its Death Throes 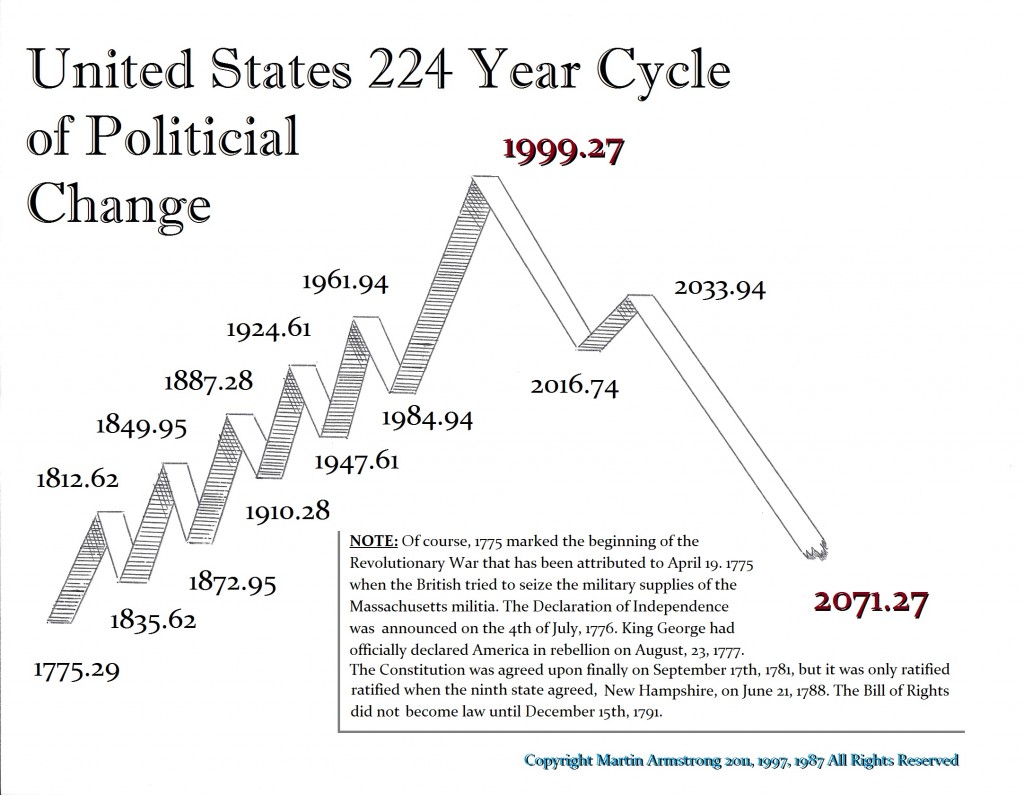 Obama is reviewing the ban on military weapons for police forces after multiple instances of deliberate attacks on police officers. Instead of prosecuting the bad police officers, they are preparing to dig their heels in and arm the police to escalate the confrontation between the people and the police.

This, unfortunately, is also how Rome ended. It was not that the barbarians invaded Rome; rather it was that the armies turned inward and began sacking their own cities and anyone who showed resistance toward the government (emperor). Once you fragment society and divide the people by turning the State against its own, the end is not far behind. This weakens the bonds of civilization and sets the tone, which allows the barbarians to invade for society broke apart. The 33 years from 235 AD to the collapse of the monetary system in 268 AD saw 14 emperors.

The 224-year cycle of political change for the United States peaked in 1999 with Bush Jr. coming to power; although he was was a puppet president as Dick Chaney really held the reins of power. The slide down was hard. Obama has also largely been an absentee president as he has missed more than 60% of his morning security briefings since he is more interested in playing golf. The 2016 turning point may mark the shift in power from the bureaucrats back to a central figure. Keep in mind that Trump will certainly not be like Bush or Obama. Even Hillary will treat the bureaucrats as hired help. So either option will be more assertive than what we have seen since 1999. Even gold bottomed in 1999 and has risen because it is a hedge against government and not helicopter money, etc. 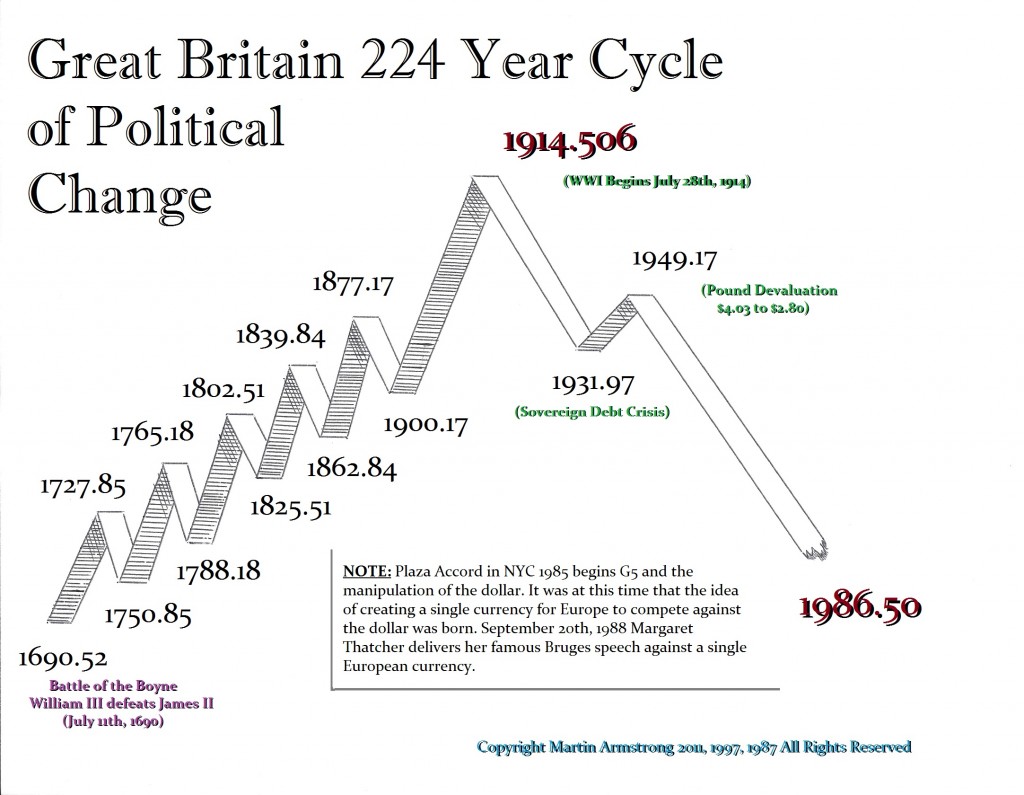 Look at this same model on Britain from the day William III defeated James II at the Battle of the Boyne to the very day World War I began, where the United States displaced Great Britain as the financial capital of the world despite having been virtually bankrupt in 1896 just 17.2 years before. Note that the declining wave is 72 years. The first low came when Britain abandoned the gold standard during the Sovereign Debt Crisis of 1931. There was a modest rebound, but World War II prevented any sustained recovery. Then in 1949, Britain was compelled to devalue the pound from $4.03 to $2.80. The next devaluation came in 1967 from $2.80 down to $2.40. Then the pound collapsed to par in 1985.

Over the next 4.3 years, Margaret Thatcher saved Britain from the euro, which was an idea put forth at the Plaza Accord when the birth of the G5 was established. The idea was that the dollar was too high and that its strength was because it had emerged as the only major world currency. The idea was born that if Europe created a single currency, there would be a rival to the dollar. This was really hatched in France. Germany saw this as a means to an end to expand its own exports throughout Europe by eliminating the currency risk for its manufacture base.

Thatcher saved Britain but it caused dissent within her cabinet. There were members such as Nigel Lawson who had been at the Plaza Accord who supported moving into a single currency and surrendering the British pound. However, Lawson was a closet Bretton Woods guy at the time who felt strongly that currencies had to be fixed. He was not so much a goldbug, but wanted a fixed currency and that would be the ERM followed by the end goal – the euro. Geoffrey Howe (1926-2015) was another key cabinet member who clashed with Thatcher also over the euro. He masterminded the development of new economic policies embodied in an opposition mini-manifesto.

In June 1989, Howe and Nigel Lawson secretly threatened to resign over Thatcher’s opposition to British membership in the exchange rate mechanism of the European monetary system. Both Howe and Lawson were sold on the ERM and the idea of the euro. They effectively forced Thatcher out of office over this very issue in 1990 and wanted to surrender British sovereignty altogether. Fortunately, they lost. Now after Brexit, Britain will not be dragged down with France and Germany.