Thanks for all you do and all your hard work!

I have a question I was hoping you would comment on. I have been trying to wrap my head around the hows (not the whys) of the absurd consequences of this plandemic.  What it reminds me of is the fight between the Federalists and the Anti-Federalists during the ratification process of the Constitution. I was taught the Bill of Rights bridged the gap between the issues back then and obviously satisfied their differences since the ratification went through.

Today, it seems as if there is no Bill of Rights and no possible bridge to balance political differences. There are tyrannical federal policies (under the guise of public health/national security) and the lawsuits from state AGs, governors and private organizations to prevent these policies.  This is the obvious recourse.  But it seems this is not enough and more importantly this recourse will not prevent the same thing from happening again in the future.

So my question is what recourse did the Anti-Federalists have (after the Bill of Rights were added to the Constitution) to address their worst fears? Elections? Overthrowing the government?

Are the Bill of Rights being violated just during this cycle of history?  Or is there really no other recourse besides arming ourselves if the police decide not to support the people?

ANSWER: The recourse of the anti-Federalists was a separation that led to the American Civil War. What you are saying is only partly true. They voted on the Constitution without the Bill of Rights. They got it through only on a majority vote of 39 out of 70 attendants. To the surprise of most, the United States was wrongfully created and the Federalists won at first, but it was the opposite party of Jefferson that eventually took down the Federalist Party.

It was Alexander Hamilton who led the charge to ratify the Constitution. He solicited John Jay and James Madison, and together they would create a series of 85 articles, published in the New York newspapers between October 27, 1787, and August 16, 1788, which became known as the Federalist Papers. It was Hamilton who chose the title of The Federalist, which was at that moment a controversial act of political aggression since it was the anti-Constitutionalists were actually for federalism insofar as it was a union. By entitling this article series The Federalist, Hamilton would take the high ground by asserting that the Constitution represented a better version of federalism than the Articles of Confederation.

Once federalism took hold, it quickly became self-evident that the people overthrew a king for ruthless bureaucrats. The Whiskey Rebellion was a tax protest in the United States beginning in 1791, during the presidency of George Washington. Farmers who used their leftover grain and corn in the form of whiskey as a medium of exchange were forced to pay a new tax. Yes – it was a 1791 version of Bitcoin. Many participants were Revolutionary War veterans, who argued that they were fighting for the very same principles of the American Revolution – no taxation without local representation. Of course, the new Federal government maintained the taxes were the legal authority of the taxing powers of Congress that they put in the Constitution – not the people.

It was in July 1794 this first confrontation between those who really had not consented to this federalism erupted into violence with more than 500 armed men attacking the fortified home of tax inspector General John Neville. President Washington responded personally with men he then called “rebels” to justify their massacre. Once the state attaches the label “criminal” it then justifies violence against them regardless of the issue in question. 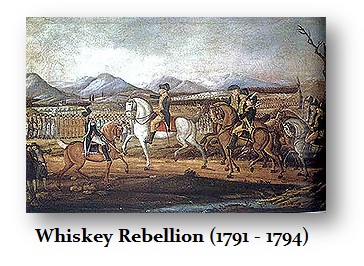 Washington gathered an army of 13,000 militia provided by the governors of Virginia, Maryland, New Jersey, and Pennsylvania, and set out to wage war against the American people, most of whom had fought for American Independence. Washington rode at the head of an army personally. The rebels were way outnumbered and it became clear, pay your taxes or you will be dead. The rebels went home before the arrival of the army, and there was no confrontation. Nonetheless, it was at that moment that the evil of the federalist was exposed once and for all.

The union from that moment on was NEVER 100%. As I said, the ratification was 39 out of 70 votes, and if human nature is what it is, there were probably votes that were bought with gold. It was this union by force that led to the American Revolution. The slavery issue was simply that it was the labor force in those days. Today they are outlawing fossil fuels which is already altering the course of the economy. Putting the human question of slavery aside and looking at this from an economic perspective, the North was telling the South they had to lockdown their economy and effectively terminate its existence. Naturally, with time, many stayed and were paid wages instead of just free room and board, as was the case of serfdom. A serf could not be sold except with the farm, whereas a slave could be sold individually.

In modern terms, if you outlaw the means to earn a living over whatever issue, they will rise up against the source of that decree. Hence, history will repeat because human nature remains the same. Consequently, the ONLY solution will be separation, for the tyranny of the majority will also result in civil war.

« The United States Has Been Invaded
CONFIDENCE v Fiat »