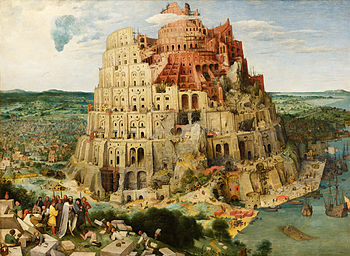 QUESTION: Do language and currencies move in line with each other? Is language a leading indicator to currency i.e. Spanish in California. Will they create their own currency if they separate from the states?

ANSWER: There is a direct link between currency and language. When I was doing interviews in Europe, I explained the euro would fail because Europe lacked a single language. I laid out the example of the United States, for it became the melting pot in all reality. The key was not a single currency in the USA that made the dollar dominant, but a single language. The same was true of the Roman Empire. It was the language that created the empire because everyone could intermarry and communicate, which resulted in an economic boom.

If we put religion aside and take the story of the Tower of Babel at face value as a parable rather than history, we still see the core as a lesson. This story is about the unity that emerges with a single language. There were two instances in my personal life where I encountered this. First was in Paris. I was a keynote speaker at a BIS conference. I sat at the head table with all the heads of central banks in Europe. The Italian could not speak German, the German could not speak Italian, and ultimately, the table began to speak English to the dismay of the French host. English was the common language everyone knew. When I was invited to China by the central bank with the Asian Currency Crisis in 1997, the same thing happened. I took some people from our Tokyo office and what happened there was the same thing. The Chinese could not speak Japanese and the Japanese could not speak Mandarin. Once again, the meetings took place in English. English became the world language because the US economy was the core economy. The language is clearly tied to the currency as it was in ancient Rome. The Biblical story reads:

1.Now the whole world had one language and a common speech. As people moved eastward, they found a plain in Shinar and settled there.

2.They said to each other, “Come, let’s make bricks and bake them thoroughly.” They used brick instead of stone, and tar for mortar.

3 And they said, “Come, let us build ourselves a city, and a tower whose top is in the heavens; let us make a name for ourselves, lest we be scattered abroad over the face of the whole earth.”

4 But the Lord came down to see the city and the tower which the sons of men had built.

5 And the Lord said, “Indeed the people are one and they all have one language, and this is what they begin to do; now nothing that they propose to do will be withheld from them.

6 Come, let Us go down and there confuse their language, that they may not understand one another’s speech.”

7 So the Lord scattered them abroad from there over the face of all the earth, and they ceased building the city.

In the USA, if you ask an American what are they, they will respond, “Half Irish and half German” or whatever. All the Europeans intermarried in the USA because they spoke the same language. In Europe, an intermarriage between a German and Irish is the exception — not common in the least. Europe could not be united simply by a currency.

Hispanics have migrated to the USA from Latin America, but the majority have retained their language. That has defeated the melting pot. In California, 44% of the population over five years of age speak something other than English, and therein lies the demise of California. Refusing to adopt the language of the nation you migrate to ultimately means you are refusing to adopt that culture. If that subculture then becomes the majority, the culture of the state will change and therein lies the seed to breaking the bonds that would link California to the rest of the nation.

California became a state on September 9, 1850. The very latest California would separate and become its own country would be in 2074. The beginning of separation was targeted for 2004, which was 50% of the 309.6-year ECM cycle. Right on target, following the 2003 gubernatorial recall, Tim Holt and Martin Hutchinson proposed in newspaper op-eds that the state should split into as many as four new states. They argued for dividing California into distinct geographically and politically defined regions as the Bay Area, North Coast, and Central Valley, as well as the historic Shasta/Jefferson region. Each proposed they should be separate states due to culture. Then on  December 19, 2013, venture capitalist Tim Draper submitted a six-page proposal calling for California to be broken up into six new states. The California secession movement has picked up steam with the election of Donald Trump.

California will separate into its own country after 2032. However, the pressure to split the state itself is also on the rise. This is certainly being fueled by the language differences that go hand-in-hand with culture.