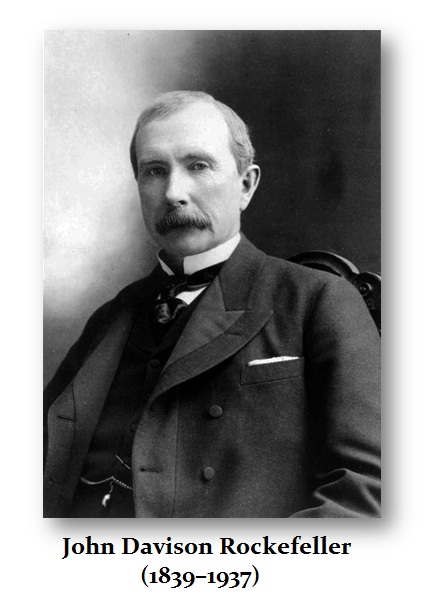 John Davison Rockefeller Sr. (1839–1937) was born into a large, poor family in upstate New York that moved to Cleveland, Ohio. He became an assistant bookkeeper at age 16 and went into several business partnerships beginning at age 20, concentrating his business on oil refining. He became rich when he founded the Standard Oil Company in 1870. He ran it until 1897 and remained its largest shareholder.

After Rockefeller retired, he spent most of the last 40 years of his life creating modern philanthropy. His fortune was mainly used to create targeted philanthropy, which has been the model for Bill Gates. Rockefeller created foundations that targeted medicine, education, and scientific research. His foundations funded medical research and nearly eradicated hookworm and yellow fever that killed many in Philadelphia during the mid 19th century. 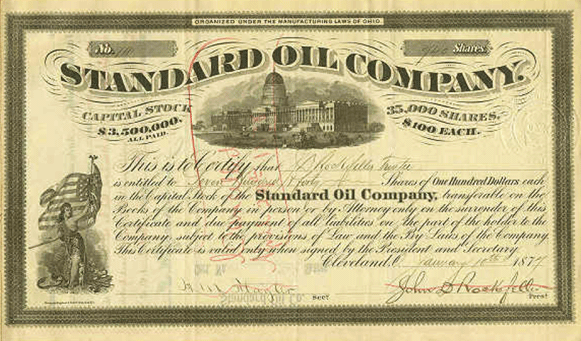 By 1865, Standard Oil was the largest and most profitable organization in the world, moving to Manhattan to house all the new employees. At last in 1911, the Supreme Court of the United States found Standard Oil Company of New Jersey in violation of the Sherman Antitrust Act. It was to be broken up. Standard Oil was eventually forced to break into multiple companies because it was ruled a monopoly, BP, Exxon, ConocoPhillips, and Chevron (among others) are all subsidiaries of Standard Oil. Curiously, Rockefeller has been Bill Gates’ idol. Microsoft was also to be broken up, but Gates stepped down as part of the deal.

Rockefeller is usually portrayed as a villain with a host of bad traits. He was ruthless, unscrupulous, greedy, and a noted bully who carved a very cruel path to dominance. As a percentage of the United States’ GDP, no other American fortune ever reached such a height 1.6% of a GDP, which was $92 billion when he died. Bill Gates may be following Rockefeller and his philanthropy returns a profit like his shares in vaccines. He pretends to hand out money when in fact it is more like venture capitalism. But today, GDP is about $21 trillion so to match Rockefeller, Bill has to accumulate $336 billion. According to Forbes, Bill is worth $130.6 billion, so he has to create a lot more diseases to manufacture endless vaccines to catch up at just 0.006%.

The New York Times reported on Rockefeller in 1937: “He was accused of crushing out competition, getting rich on rebates from railroads, bribing men to spy on competing companies, of making secret agreements, of coercing rivals to join the Standard Oil Company under threat of being forced out of business, building up enormous fortunes on the ruins of other men, and so on.”

Likewise, Bill Gates is leaving his children a tiny fraction of his wealth, again, following Rockefeller.