Are Bonds Preferable to Stocks in a Crisis? 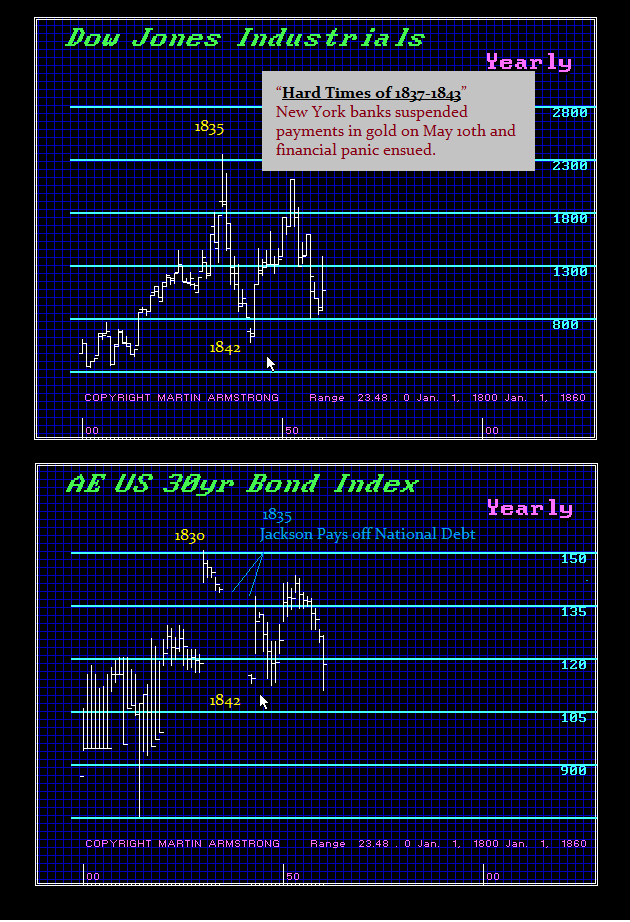 QUESTION: There are a few people coming out claiming the stock market will crash so buy bonds even though you will lose money. How can people keep calling for a mega-crash so long with constantly being wrong since 2010?

Thank you for your reason

ANSWER: These people are still living in a world that is defined by the event of the Great Depression. Even Germany forces austerity upon Europe because they do not understand the events behind their own hyperinflation and stupidly assume it was merely an increase in the supply of money that caused the event. Nobody seems to be bothered to ask which comes first – the chicken or the egg?

Here is a chart of the stock market with the US Long Bond. Andrew Jackson paid off the national debt in 1835. President Jackson also shut down the Second Bank of the United States on Sept. 10th, 1833. Jackson announced that the government would no longer deposit federal funds in the Second Bank of the United States, which was a quasi-governmental national bank. The stock market peaked in 1835 and began its decline without a central bank. Then during July 1836, Jackson issued the Specie Circular. Under this act, the government would only accept gold or silver in payment for federal land.

Jackson’s Bank War closing down the Bank of the United States was personal because they funded his opposition. By shifting deposits to state banks, Jackson set off a major crisis undermining the entire monetary system. He effectively devalued all the circulating currency in the country with one law – the Specie Circular. Suddenly, there was a run on gold. The Panic of 1837 unfolds as New York banks suspended all withdrawals of gold. Jackson created massive austerity, but he had shut down the national debt as well. This was a very complicated financial crisis with an interesting mix of events combining together.

There were NO federal issues of paper money and the first paper dollar to be issued by the government did not unfold until 1860 to fund the Civil War. Therefore, Jackson effectively canceled all paper money by refusing to accept it and this resulted in a gold panic forcing the banks to suspend all payments. People were rushing to banks to exchange their paper currency for gold and banks could not meet the demand and suspended all demands for gold. 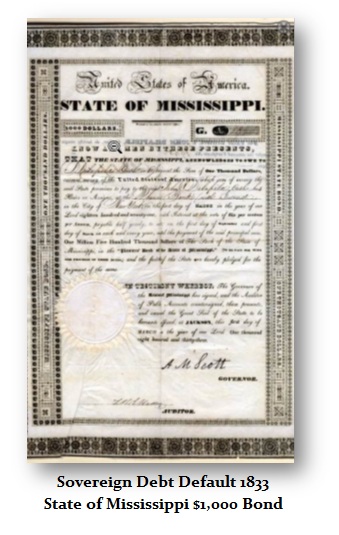 When federal bonds resumed in 1842, they had declined in value as interest rates rose. There was no flight to quality, only to gold given there were no federal bonds. This is when several states moved into default permanently upon their debt. Therefore, the Monetary Crisis Cycle that hit then was felt in the state and local levels – not federal. The Monetary Crisis Cycle that hit in 1931 resulted in widespread sovereign defaults outside the USA.

Each cycle that hits is slightly different characters and reasons. I highly warn against buying any sovereign debt whatsoever. Any federal debt to hold must be short-term no more than 90-day paper. In the case of the Hard Times of 1837-1842, the stock market crashed in terms of gold because all money was effectively canceled. Paper money collapsed as notes lost their legal-tender value. Thus, only gold rose in value as the medium of exchange thanks to Jackson refusing to accept anything but gold.

This time around, bonds are legal tender so that is the money that will decline in value far more than anyone expects. Both the Bank of Japan and the ECB in Europe have wiped out their bonds markets for they have been the primary buyer of government debt which they cannot now resell.