1800 was Almost the Second American Revolution 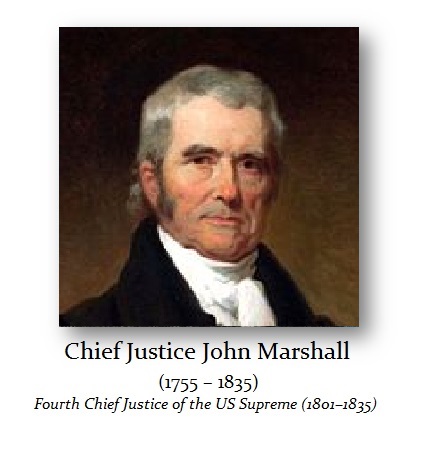 Political rivalry in the United States has been taking place since 1800 when the clash between the Federalists and the Jeffersonians pushed the political body of the nation to the point where it teetered on the brink of a second American Revolution. This clash of the Titans was sparked when the Federalists were about to lose power. John Adams tried to prolong Federalist control in direct defiance of the people by stacking the courts with Federalist judges to demonstrate that law was not law; it was driven by bias from the start. The new Constitution was not specific and far too ambiguous in many areas including that of the judiciary.

John Marshall (1755 – 1835) was previously a leader of the Federalist Party in Virginia and served in the United States House of Representatives from 1799 to 1800. He became the Secretary of State under President John Adams from 1800 to 1801, and in a political crisis he became the fourth Chief Justice of the Supreme Court of the United States (1801–1835). Marshall was thrown into the office of Chief Justice in the aftermath of the presidential election of 1800. The Federalists were soundly defeated and their dream of a federal government dominating over the states was coming to an end. They were about to lose both the executive and legislative branches to Jefferson and the Democratic-Republicans. In a last desperate moment, President Adams and the lame duck Congress passed what came to be known as the Midnight Judges Act. This draconian attempt to install sweeping changes to the federal judiciary to always rule in favor of the Federalists was now at issue. This included a reduction in the number of Justices from six to five to prevent Jefferson from appointing a Justice when the next vacancy in the court arose.

The incumbent Chief Justice Oliver Ellsworth was in poor health, and Adams tried to stack the court by offering the seat to ex-Chief Justice John Jay who declined on the grounds that the court lacked “energy, weight, and dignity.” Jay’s letter arrived on January 20, 1801, and there was little time left.

Adams turned to Secretary of State John Marshall who accepted the nomination immediately. At first, the Senate was delayed in hopes that Adams would make a different choice. Nonetheless, the Senate had no choice and confirmed Marshall on January 27, 1801. He was sworn in on January 31, 1801, and officially took office on February 4, 1801. The strange rush meant that Marshall continued to serve as Secretary of State until Adams’ term expired on March 4, 1801, thereby overlapping Marshall’s two positions of Chief Justice and Secretary of State.

Marshall became the longest presiding Chief Justice during the administrations of six presidents: John Adams, Thomas Jefferson, James Madison, James Monroe, John Quincy Adams, and Andrew Jackson. Marshall remained an advocate of Federalism, and, in this capacity, he was the nemesis of the Jeffersonian school of government throughout its tenure. On July 4, 1826, at the age of 90, John Adams lay on his deathbed while the country celebrated Independence Day. His last words were, “Thomas Jefferson still survives.” But Jefferson had died five hours earlier at Monticello at the age of 82. This, nonetheless, illustrated the battle between Federalist and Jeffersonians who believed in state rights and freedom.

Marshall was faced with the fact that the Constitution’s framers left the Supreme Court’s existence and scope of power very ambiguous. For the first three presidential election cycles, there were few matters of any practical concern with regard to law. The midst of this political crisis of 1800 threatened a political revolution, not necessarily among the people, but among the elites. This confrontation led to Marshall’s landmark decision known as the case of Marbury v Madison.

Adams attempted to stuff the courts with Federalist judges. A handful of commissions for Justice of the Peace remained undelivered when incoming Democratic-Republican President Thomas Jefferson came to office. Jefferson ordered his secretary of state, James Madison, not to deliver any of these appointments since they were clearly political. One disgruntled office seeker, William Marbury, sued to have his commission honored. Marshall denied Marbury his commission because the Act of Congress underlying the suit unconstitutionally sought to expand the Supreme Court’s jurisdiction beyond what it was intended. The case established that “it is emphatically the province and duty of the judicial department to say what the law is.” Marshall further wrote, “If two laws conflict with each other, the courts must decide on the operation of each.” Strangely, Marshall had to rule against the powers of the Court itself.

This epic battle of Marbury v Madison illustrates that law has never really been law. The fight to install judges who will rule in favor of one side or the other proves there are serious problems with law. Obviously, politicians should never appoint judges. Secondly, the fate of any person should never lie in the ambiguous words of statutes. Any law, when enacted, should be passed to a Constitutional Court to interpret what that law means, which becomes binding BEFORE it is applied to anyone. Until we are ready to reform the Judiciary, there will never be any rule of law. Moreover, judges should never have life tenure. Judges should have one term and then they’re out. They must be subject to the same laws they declare.

« Can the USA Break Apart Legally?
State Department Intentionally Deleted Parts of Press Briefing to Mislead the Press Over the Iran Nuclear Deal »