The Markets in Light of the Chaos

When we look around the world the final say in every election is always the vote of capital – which is international rather than confined to local politics. Biden has already shut down the pipeline from Alberta which will only be symbolic for whatever substitute will mere be brought in by ship and pumped into another pipeline. But politics is never about reality – it is only concerned about appearance.

When we look around the world, we must do so through the eyes of the FX markets for only then will we begin to see the real trends. The German DAX has made a new high in euros, but not in the main global currencies. In both dollars and Japanese yen, the DAX has not yet come close to making new highs.

Then we have the confusing trend in gold. So many have been asking for a Gold Report ASAP because nothing has made sense after all of these years touting gold is a hedge against inflation and the dollar will collapse. There is even the most bizarre analysis claiming that just a few months before Covid appeared, the Fed was busy pouring boat-loads of dollars into the US banks into the inter-lending market known as REPO to prevent bank-runs which were starting to develop. They claimed these were the same “tectonic fissures that developed prior to the 2008 crisis” when banks became so distrustful of each other’s solvency. They concluded: “If unsuppressed the lending rates would continue to rise, laying a path to bank failures and a contagion which would eventually derail the economy and undermine the dollar itself.”

This illustrates an inherent bias and how a little bit of knowledge is highly dangerous. The US banks withdrew from REPO, primarily J.P.Morgan, not because of US banks, but because of European. When Merkel said Deutsche Bank would not be bailed out, no US bank was willing to lend to Europe. The Fed had to step in to become the market maker. The misinformation is just astonishing.

The markets are totally confused. The real trend is laying before our eyes yet mainstream media calls any mention of the Great Reset is a conspiracy theory which is no a confirmation that it is the real trend or they would not be trying to play it down when we have Klaus Schwab telling the world we need this Great Reset.

The entire World Economic Forum’s advice is to default on national debts and the way to do that is to pretend it is for your benefit. They will eliminate all your debt from mortgages to credit cards and student loans, but the government would then own all the property in true Marxist style. I have been arguing behind the curtain to convert the debt to perpetual bonds and raise the interest rate to 3%. In addition, end all government borrowing, cap expenditure to GDP, and allow pension funds to invest in the equity markets. They say the rich get richer but they never explain how – INVESTMENT! Gates, Zuckerberg, Bezos, Dorsey, and Musk are all touted are super-rich but it is based on their stock holdings – not cash. Eliminate the requirement to invest in government bonds for pension funds including Social Security and the economy will boom with the creation of many jobs.

Schwab is a bottom-line Marxist. He thinks he can seize control of the Fourth Industrial Revolution and steer it in the direction he desires. I am a programmer. He is not! He has no idea how innovation takes place. It cannot be directed from central governmental power. How many times do we have to crash and burn on Marxist theories until we finally learn the lesson? 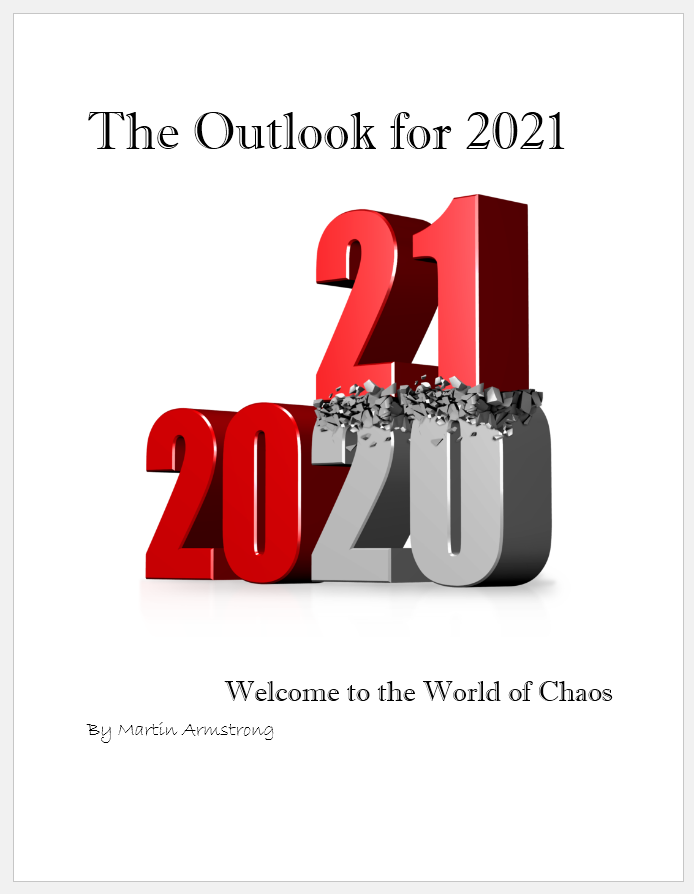 We are preparing a number of reports for this confusing year where what should be up is down and what should be down is up. Socrates will be writing the technical sections. What we face cannot be influenced by opinion. Capital flows are the ONLY real indicator of the future.

« Trust and the Point of No Return
Soylent Green – Human Compost »