The Cycle Behind COVID-19

I have reliable research I have not yet concluded but so far this COVID-19 could have been a human experiment. It appears to be like HIV insofar as it attacks the T cells and can penetrate them. These are the human cells that attack viruses. This is most likely why older patients are dying because they have fewer T cells as they grow older. This does not confirm any connection to the Wuhan lab for there have been such experiments carried out in various other places around the world. Therefore, this may damage other organs in older people including the lungs.

This still does not negate the exaggerated response of shutting down the world economy. Sweden has proven that lockdown makes no difference. The WHO and Gates have increased the risk of starvation and lowered the living standards of society as a whole. That poses a far greater threat going forward the longer the lockdown continues. The greatest plagues in human history have taken place also during solar minimums for this is when the climate turns colder and crops fail, increasing malnutrition, which in turn lowers the immune system enabling greater death tolls.

Therefore, this COVID-19 may spread like the flu, but it still does not appear to be as lethal during this season. That does not rule out a new improved version during the next flu season. 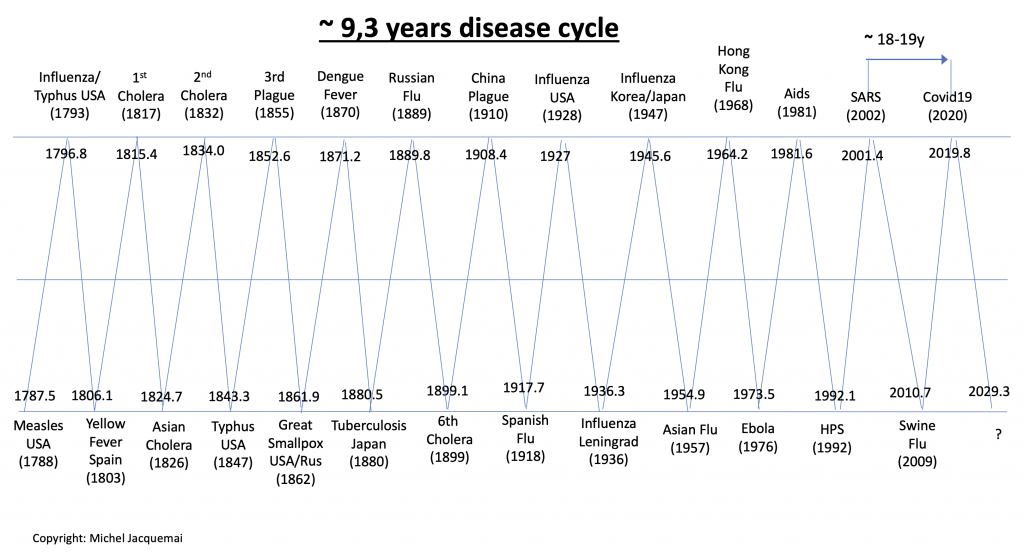 A client sent this in which is an interesting projection. Our own work has found that the cycle appears to be closer to 8.6 years when dealing with viruses exclusively. This is combining bacteria and viruses. Any way we look at this, there is a cycle to disease as well as to the economy and life in general.

If we look at just the viruses, the Severe Acute Respiratory Syndrome (SARS) outbreak was first discovered in Asia in February 2003. The outbreak lasted approximately six months as the disease spread to more than two dozen countries in North America, South America, Europe, and Asia before it was stopped in July 2003. Therefore, cyclically, the timeline for most viruses remains the same and we warned that this new virus “should peak out in April/May.” There was the potential for a peak in the Southern Hemisphere at the latest by June/July since it likes the colder weather. I further wrote: “There is NO INDICATION that this will last longer than any other virus issue. For now, it will probably continue to expand into April/May before we see any top in the number of cases.”

When we look at MERS-CoV, it was during September 2012, when WHO had been notified of 2494 laboratory-confirmed cases of infection with MERS-CoV in the Middle East. The fatality rate was 34.4%. MERS-CoV appears to have come from an animal source in the Arabian Peninsula. Researchers have found MERS-CoV in camels from several countries. Studies have shown that direct contact with camels is a risk factor for human infection with MERS-CoV. In this incident, MERS was first identified in September 2012 and had subsided by June 2013. There was a second outbreak in 2015 in South Korea. The first patient of the outbreak developed symptoms on May 11, 2015. WHO and the South Korean government estimated that the outbreak ended in July 2015, after about two months. By the end, there were 186 confirmed cases and 38 deaths.

We will see COVID-19 reappear again in the next flu season of 2021/2022. If it mutates like influenza for each season, then it can perhaps become more deadly in the future. Cyclically, Socrates projected the April/May period for the peak and ideally the week of April 6th in most places. SARS came 17.2 years ago and MERS 8.6 years ago. Cyclically, there may be a resurgence in two years which would be in 2021/2022 flue season (2021.6 for a beginning).

Richard E. Nisbett (1941-) wrote a good book entitled, “The Geography of Thought, How Asians and Westerners Think Differently … and why.” He attributed his work to a Chinese student who said to him, “You know, the difference between you and me is that I think the world is a circle, and you think it’s a line.”

He goes on to quote him:

Nisbett was indeed correct. Asian culture has instinctively understood the cyclical movement of TIME. In Western culture, we tend to think linearly, not dynamically. When we look at events, we try to reduce them to a single cause and effect. This thinking produces confusion when things do not follow that chosen path and false beliefs arise by not recognizing the world is a far more complex place. Things are never a single cause and effect. There is a hidden order behind everything that is far more complex than meets the Western eye. 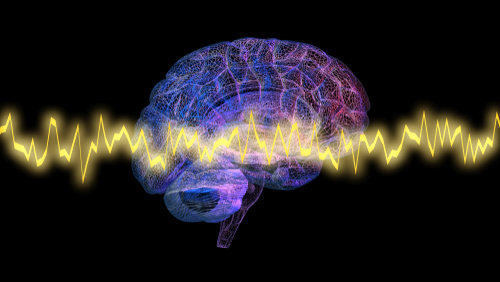 Consequently, like climate change, the projections are always linear. There is no reconciliation with cyclical behavior despite the fact that absolutely everything in the universe functions cyclically right down to the beat of your heart to the brainwaves in your head. When you no longer have a brainwave, you are dead.

« The Truth About the Bogus Report to Start this Lockdown
Trump v Gates – Is Gates Winning to Overthrow Trump? »