The Bull Market – This time It Really Is Different

This current Bull Market has indeed been the most hated in history. Typically one expects complete euphoria as new highs are made. However, this bull market is really different this time. This rally is by no means the product of euphoria. While the majority of analysts have been calling for a crash since 2010 and every new high was supposed to be the last, this cannot be compared to the Roaring 20s.

If we lift the rug and look closer, you will start to put the pieces together. There has been a bond and property rally over the past seven years whereas rates were rising into the 1929 high and property burst in 1927 with the Florida Land Bubble. This is not even similar to the roaring Dotcom Mania of 2000. The PE Ratio was significantly higher in both instances.

Government bonds have moved even to negative yields at times in Germany and creditors have demanded insane levels of credit to buy housing in the States opposite of the free lending going on in Europe as banks are desperate for yield.

Rarely has high-end property prices around the world soared so high. We have seen this is London, Toronto, New York, Miami, Vancouver, Hong Kong and Sydney to mention just a few. The price of the average American house remains still 20-50% off from 2007 levels depending on where you look. 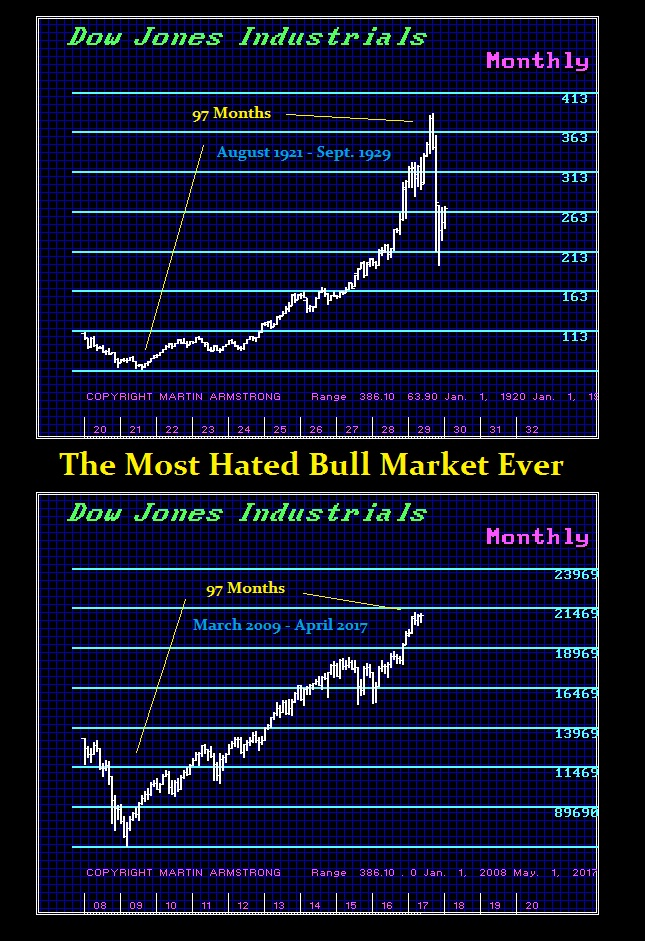 Rare coins, art, and antiques have soared around the globe. Add to all this the craze, we have  cryptocurrencies and BitCoin going nuts. Yet the entire bull market of the Roaring ’20s was 97 months. We passed that mark in April 2017. This is also the longest bullish trend suggesting there is something else afoot.

So exactly what is going on? Do we really have a bull market in EVERYTHING? Well the answer is yes and no. If we look closely at the high-end property market, much of the sales are for CASH – not leveraged. This too is highly unusual. Historically, such asset bubbles have been funded by banks. Yet the bitter experience has shown that debt-funded asset bubble implode taking the banks with them. The assets collapse in value because the banks need cash with withdrawals. The leverage magnifies the cash on the way up, and on the way down, assets crash to rebalance against the actual supply of cash.

For this reason, banks must be able to withstand such a contraction and the theory is to raise bank capital. That means raising bank capital to meet “stress tests” imposed by the various government authorities. The European Banking Authority (EBA) published the list of public sector entities (PSEs) that may be treated as regional governments, local authorities or central governments in the area of credit risk, in accordance with the Capital Requirements Regulation (CRR). This list will assist EU institutions in determining their capital requirements for credit risk. The problem with all of this “stress test” criteria is the fundamental assumption that government debt is risk free. In particular, the EBA includes those PSEs that are treated as regional governments, local authorities or central governments due to their reduced risk level. As a result of this treatment, exposures to the PSEs included in the list will qualify for the same risk weight as for the respective regional government, local authority or central government. The assumption that government debt is superior to private debt backed by assets underscores the real risk on the horizon.