Forget the Doom & Gloom – It’s Not That Bad 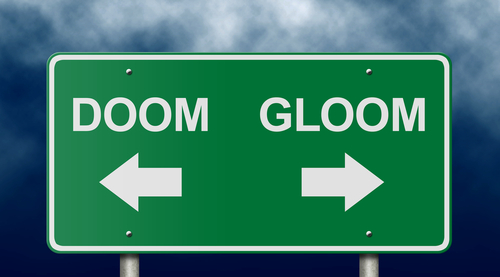 I know things are dark, but you are becoming down right gloomy. If the world is falling apart in Austrialia, Europe, Japan and ultimately the USA, there must be somewhere, or somewheres, the computer says things will be great in, or get better in. Where to go now? China right now, no thank you. Maybe with a Polar shift and a physical revolution of the poles and new economic policy, then maybe. But not as it is. You could lose your everything as it is. So where? Singapore? Africa? India? Or do we just dig a hole and hide? I’ll take a cave in the Alps, or the Rookies with Solar Panels and hydroponic gardens.

I am (just) slightly older than you are and I still am ready for another 60+ years. What do we all do, us and the younger folks between now and 2080? Let’s kick it up and get going.

ANSWER: We do not necessarily have to run and hide in a cave. I will let you know if it really is that bad. What we are looking at is the collapse of governmental systems. That does mean you have to run and hide someplace. Yes, that is possible in certain areas. But politically, things change and we get to restructure.

As far as pole shifts, the climate changes yes. Where to run and hide? Who knows. The pole can just be a temporary excursion rather than a 180-degree flip. The only point of this is to ensure you have some food stored for there can be shortages with cold weather. Perhaps you will not even need it. Better safe than sorry. Nobody really knows what happens in a pole shift. One of the girls in the office fled last year because of the monster hurricane CNN said would kill everyone with a 16-foot wall of water, which maybe reach 1 foot at my house. She fled to Orlando and the joke in the office was it was following her. So it is not always wise to flee – you might be running smack into the event. Let’s just be patient and see. Places that are normally cold are warm and vice versa. This is strange so far but perhaps a leading indicator.

The worse thing would be flying at that moment in time. Airplanes are guided by where magnetic north and the North Pole has been moving more rapidly since 2010 than at any time in recent history. This has even forced changes in calibrating airports because planes would miss them and land in the water if not adjusted to where the North Pole is presently.

So, no need to run and hide. We are looking at an economic implosion. Yes, that will result in civil unrest and that will most likely be focused in the big cities. So the risk would be greater for someone living in LA or NYC rather than in the suburbs. But we are not looking at a Mad Max type event at this time. If that would occur, we are looking off into 2032-2037 period.

Besides, just perhaps if we have enough people who really UNDERSTAND the problem, then when it comes to rebuilding, we can all yell and be heard at that point – just not before the Crash & Burn. Nobody will listen and hand over any power until there is no other choice.