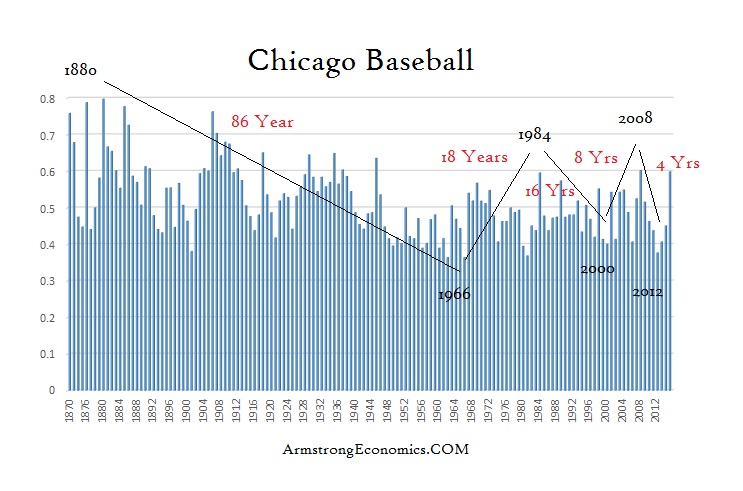 Everything has a cycle. The difference between the Triple Crown and Villanova is that it was actually substantial. In the case of the Triple Crown, nobody won it in 31 years, and I was able to work out the cyclical pattern of the event. Each sports team has a different cycle. Therefore, in the case of Villanova, the team is the basis of their cycle. Villanova simply lined up and its time was due. The methodology between the two events are entirely different. The key is to determine what you are trying to develop a cycle on. Sports are different from the Triple Crown since there is a winner each year.

The obvious critic will say that this means that the Cubs should win every 31 years. That is a pretty shallow statement and it reflects a lack of understanding cycles. Chicago won the majority of its games in 1880; it declined into 1966, winning the least amount of games after completing an 86-year cycle (10 * 8.6). Then Chicago rallied for 18 years (2 * 8.6) and declined for 16 years. Chicago rallied again for 8 years and then fell for 4 years. Since they still won more in 2012 than they did in 1966, they remain in a trending-higher consolidation pattern that will ultimately surprise everyone and score a miracle victory.

Every team has its own cyclical pattern just like markets and politics.

BTW: Oil inventories reached an 86-year high this year and will now begin to decline.

« Villanova Wins on Pi
Influence – Does it Matter? »