Confused? When Will This End?

QUESTION: Dear Martin, First of all, thank you for your daily blogs. First thing I read every morning. I can’t wait to attend Novembers Orlando conference. My question is about the inverse relationship of Gold(precious metals) and the Dollar. Looking at historical charts it would suggest that we may continue to see a price decrease in Precious Metals as the value of the dollar rises, deflation. This will continue until the Government panic sets in around 2021-2023 as your ECM tells us. Then serious lift off of Gold may occur as a new monetary system sets in and people want to get rid of dollars because of the complete loss of confidence in government and the future of the US monetary system.

Would love your input and thoughts.

ANSWER: There is no question that we should see overall deflation moving into 2020, but this is a different kind of deflation. This is capital contracting and hoarding, so you will probably see asset prices rise, but GDP actually continue to contract. The classic “inflation” people talk about is rather narrow-minded. They tend to see waves of only demand inflation when people are rushing to buy things. This is associated with hyperinflation, but that happens when confidence collapses in a government. That can take place in the peripheral small economies like Zimbabwe or the collapse of a government post-war as in Germany and other Eastern European nations post-WWI. It does not unfold in the core economy arbitrarily while others survive. It always comes from the outside in.

Now, let us look at cost-push inflation such as we saw with the OPEC crisis. They just raised the price of oil and the dramatic rise in the cost of production created the recession, yet demand contracted. So prices can rise from a ratcheting up of cost which can be both private like OPEC or through government with taxes.

Here you have Larry Summers, the father of NEGATIVE INTEREST RATES, admitting he cannot forecast the business cycle. Thanks for the many offers to buy him a seat at the WEC, but he looks at the world through the eyes of power and wants to change what the free market does. He has no interest in understanding how the free markets function. So we are faced with people who think they can force the economy into doing whatever they would like to see happen. It will NEVER work. If they cannot forecast, then how is it possible to create a trend they do not understand?

Since they lack any real world experience, it NEVER dawned on these people that there are two sides to every coin. They are trying to manipulate the world economy, yet they do not understand how it functions. Mr. Negative Interest Rates has set in motion the collapse of socialism by keeping interest rates low and has wiped out pension funds. So now that they created the next crisis, the next solution they are proposing is to seize everyone’s retirement funds so they can bailout their own. 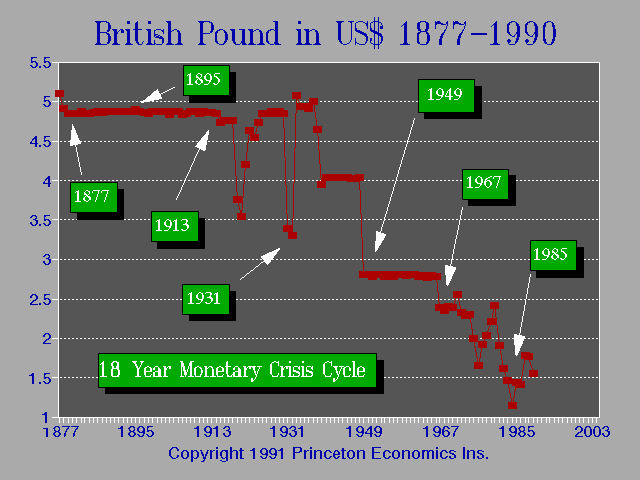 Many of our old clients will remember this chart we published back in 1991, showing the 18-year Monetary Crisis Cycle that picked the 1985 high in the dollar. The next target was 2003, the breakout against the dollar following 2002, which was the low in the DOT.COM bubble. The British pound took off from 1.40, reached about 1.80 in 2003, and kept going into a high in 2007 at 2.1151. The next target will be 2021. Keep in mind that these previous targets like 1949 and 1967 were breaks in the fixed exchange rate system. We are now on a floating exchange rate system so these tend to pinpoint the start of problems rather than the end.

As far as gold, 2016 will complete five years down from the intraday high in 2011. Unfortunately, there is a split with the highest closing being 2012. That means the five-year bear market correction may not end until next year. There can still be a dramatic swing if we drop to new lows and then wildly break out to new highs. This would leave the bulk of the people confused and they would try to sell the rally, which provides the fuel to rise further. That is exactly what is unfolding in the US share market. You have countless people calling for an 80-90% drop who argue that the market is too “rich” at this level, but they are not looking at the alternative. Bonds?

We will look at this question in detail at the conference. We have to correlate the entire world to see the truth. Then we can lay down the markers; clicking them off one by one allows us to see the trend, confirming its direction for the whole. There is no doubt about it that the door opens for monetary reform in 2018. We are still in the staging period so we have to look at the whole to comprehend the trend.