QUESTION: Marty is the rumor true that there is huge short-covering going on that is taking the US share market higher?

ANSWER: Of course. As I have stated, our model tends to show the point of no return is in the 23000 level, not here. This rally since 2009 has been the most BEARISH rally ever in history. Think of this like the mirror image of gold. Gold has declined for 5 years and you have people screaming here we go with ever $20 rally. In the stock market, it has been exactly the opposite. Every time the market decline, they say here we go it will crash by 70-90%.

This is what I mean that the MAJORITY must always be wrong for they are the fuel that moves markets. I have been stating persistently that the Dow cannot “C R A S H” when the majority are bearish and retail participation is at historic lows (see Gallup poll).

The only real buyers have been due to the dollar, and sophisticated traders. The bulk of everyone else are BEARISH and cannot bring themselves to buy for they are still fighting the last rally in 2007 when they got caught. Therefore, the bulk of buying is short-covering – not fresh longs. This is very important. Fresh longs buying new highs turn sellers on a downturn. Short-covering does not. They may attempt to short against, but typically into a low – not highs.

So yes, there has been serious short-covering. That has been the bulk of this immediate rally and the relentless new highs each day. Only when the market crosses the 23,500 level do we see people surrendering and saying S H I T this is just going up. Until then, it will rally to each of our levels, stop briefly, and then proceed as long as we do not hit a turning point in TIME.

Others will point to this short-covering to then proclaim – See. This rally is not real and it will crash by 90% any moment now. This is why it is not over until the fat lady sings – or perhaps in this case, goes broke and screams.

All collapses unfold from highs with longs in panic. Major lows take place with shorts in panic. Short-covering at this stage demonstrates this is by no means a MATURE rally and we have a lot to go. Those who lost in 2007, just cannot bring themselves to say buy. This is why retail participation remains at historic lows. As long as that prevails, there is no way we have sufficient longs buying the highs from which a panic can then unfold by scaring the herd. 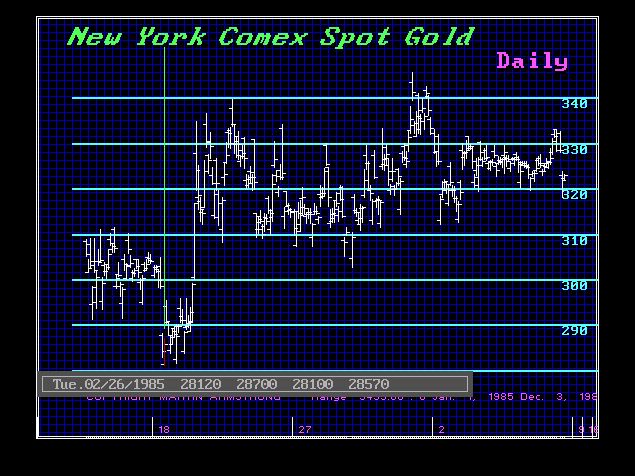 Here is the gold low in 1985. It bottomed on February 26th and on March 18th-19th a panic short-covering began. It was not people going long. It was shorts in panic. Merrill Lynch at that time hired me to TEACH one of their clients in Switzerland how to trade. They said they would pay all expenses and pay my hourly rate for the entire time even sleeping. I ask who the hell was this? It turned out he created the biggest deficit in history up to that point $25 million in gold. He was short and that is the loss over and above what he had in the account. Keep in mind the biggest hedge fund was $100 million back then.

It is routinely short-covering that created the major breakouts and lows, just as it is panic selling from longs that cement major highs. This is why I say after years of being called in to some of the biggest disasters in trading over the last 40 years, my conclusion is simply the MAJORITY must always be wrong.