QUESTION: Martin.. I have been trading /investing for over 20 plus years.

How can one be in the markets and survive if the “biggest  Safest  Banks”  in Canada are failing even today to not only fill a trade or give you a reliable quote but even to even give you an accurate account balance!

ANSWER: This is a growing problem being caused by (1) excessive regulation and (2) the juniorization of staff. Institutions have been firing people with experience to reduce cost replacing them with entry people. This is becoming widespread throughout Europe and sets the stage for a very dangerous situation. Covertly, there is an assumption that those with experience should be removed and juniors put in place and they will not fear the crash as experienced traders and that will help eliminate short positions against the government.

On top of these issues, we then have the problem of aggressive governments trying to defend themselves forcing even institutional trading to be politically correct. If the market goes down, the regulators will begin hauling in traders for interrogation. This is an exceptionally high risk in Europe.

Individual non-Americans can open accounts in the USA. Americans are turned away overseas. So for the individual, you do have to be concerned especially about dealing in Europe. The more any government interferes with the free markets, the greater the risk that your funds will be frozen and you will not be able to trade. It just may come down to having once again to trade “politically correct” to avoid being targeted. 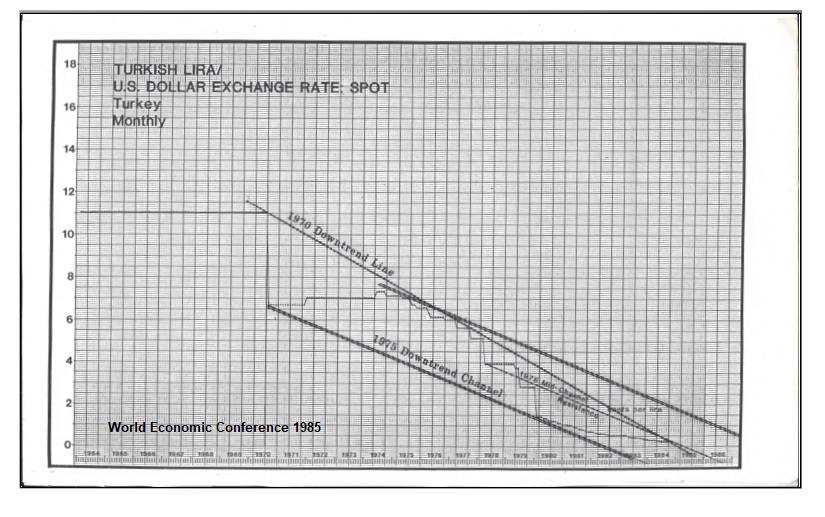 I am currently working on coding my synthetic correlation model I use to use in the Middle East back in the 1980s. The problem then was rather different. We were advising one Islamic Bank where the board made the decision to open in Turkey. However, the currency was in a perpetual decline. This is the chart from the materials handed out for the 1985 World Economic Conference. The problem back then was the lack of any market to hedge the Turkish Lira. We had to create a synthetic model correlation cyclically to tackle the hedging project we were given. That was one of the most interesting projects of my career – hedging something that did not trade.

We are bringing this model back into play because there are rising concerns among our European clients that if they hedge against the decline of the Euro and government bonds in the EU when the collapse unfolds, they will be targeted for undermining the government. The way to avoid this and be “politically correct” traders, is to once again create synthetics correlated with time.

With the hostility in Europe eliminating the ability to short government bonds in a pathetic attempt to prevent the collapse of the EU bond market, it is paramount that we resurrect our synthetic models in order to be “politically correct” in trading what will no doubt turn into a witch-hunt once again.

I wrote in the Greatest Bull Market in History in the 1930 chapter, that the witch-hunts began subtly. One of the first targets was a young trader named John Pope.

One such early victim was a young broker named John W. Pope who was only 32 at the time. He reportedly had been a soft-spoken chap, quite independent, and a student of values. He firmly believed that stocks always sought their values up or down. In 1930, John was accused of forcing Fox Films down, as it was alleged that if he had not been short the stock would not have plummeted as far down. The New York Stock Exchange summoned the young fellow before their board of governors. They interrogated him in a way that Time magazine called a “harrowing trial by statistics.”[1] John W. Pope pulled out his charts and his studies of Fox Films and demonstrated that the stock had been seriously overvalued in comparison to historical measurements. The board found no malicious reports of rumors started by Pope, and his documentation as to why Fox Films had been overvalued won the day. He was completely exonerated, but this would be a dangerous trend that eventually led to the witch hunts of the 1930s.

The founder of that company, William Fox, was summoned to the US Senate. They failed to show he was short against his own company. Never satisfied that government could ever be wrong, they then prosecuted Fox for tax evasion on a single transaction out of thousands. I explained in the Greatest Bull Market in History:

The bear-hunt continued … Gray [Prosecutor] summoned William Fox, once the proud owner of Fox Films. William Fox, upon his arrival in Washington, became ill. Fox’s doctor claimed he had an attack and stated that he believed Fox had diabetes.  But Gray, depraved, perverse and suspicious a person as he was, held true to his character. Gray simply wouldn’t believe him. Gray hired a physician to check Mr. Fox’s condition with orders to report directly to Mr. Gray. When that doctor also reported that William Fox was seriously ill, Gray still refused to believe it and then hired a third doctor ordering him to check the condition of this Mr. Fox. All three doctors agreed that Fox was very ill.

Gray still scoffed at the situation and proceeded with his case against Fox without his being present to raise his defense. Gray charged Fox had “wrecked” his former companies through stock market activity. He revealed countless details of his stock transactions right down to how much his daughter had owned. But all the evidence which Gray had compiled did not show Fox as a bear-raider but as a dead and battered bull. Gray was still not satisfied. Gray uncovered what he called a fraud. Gray accused Fox on one transaction out of several thousands of willful fraud again while Fox was still confined to his bed. Fox had dealt in the name of his company as well as in his personal name from time to time. Gray charged that on one transaction Fox had deducted a loss incurred in the market which he claimed the company had originally paid for.

The Committee naturally flaunted this in the face of the press and then announced that they were turning Mr. Fox over to the IRS. Mr. Gray took much pleasure in announcing publicly that “the recovery of evaded income tax will offset the expense (of the proceedings) 100 times,” as they voted to continue the investigation despite having failed to turn up the illustrious bear who had supposedly destroyed the market and perpetrated the Depression upon the entire world.