The US Treasury Does Have the Constitutional Right to Mint Coins

QUESTION: Marty, You are wrong. The US Treasury can create the money as the Constitution says it can. Article I, Section 8, Clause 5. The Congress shall have the Power to coin Money, regulate the Value thereof, and of foreign Coin, and fix the Standard of Weights and Measures.

To coin is used as a verb. At the time the Constitution was written, to coin money meant to create or to make money. Today’s Dictionary defines to coin as a verb meaning to make or to invent.
Why did you fail to mention this in your Blog today?
TD

ANSWER: Yes, you are correct. I suppose I was referring to the 99.99% of the money supply rather than the coins put into circulation by the US Treasury. President Nixon only closed the gold window in 1971. He did not demonetize “gold” as money under the Constitution. Yes, technically the US Treasury can coin money, but it coins today’s coins. The Fed does not do that. The coinage it creates is minimal in comparison to the overall scheme of things. Since 1913, the printing of currency has been delegated to the Federal Reserve. Prior to 1913, the Treasury issued the paper currency which was backed by coins. 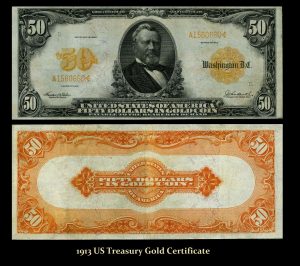 This was the last issue of paper currency issued by the United States Treasury in 1913, the year that the Federal Reserve Act was passed. 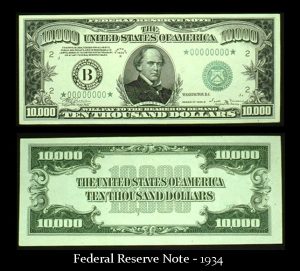 « Is Facial Recognition Destroying our Right to Privacy?
Using Other People’s Money »