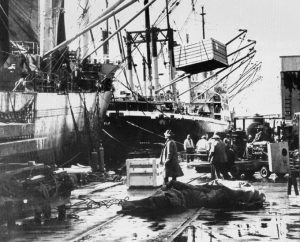 COMMENT: I was just reading your post, Universal Basic Income, and I feel the need to respond. I have always worked, always found whatever work I could. I have worked on market stalls and also on installation of Active Directory in a government institution. I managed to graduate with honours from uni. I am now retirement age. I brought my children up single handed and have never had any wealth but I have to point out that people who are living in poverty don’t automatically become criminal. There’s so much talk about playing the system, but we have to ask why so many people need support. It’s because industry has disappeared and we have developed a class system where the difference between haves and have nots has widened. I live in UK and it’s an industrial wasteland, we had jobs to go around not all that long ago but now there are none for the majority, except in self-policing call centres. It isn’t due to population increase alone, there is nothing for us. Closing the pits was a mistake. There’s no significant increase of carbon and when it becomes Cold which it will in a few years, we’ll be scratching for surface coal to cook and be warm, trees will be decimated. We import things that we used to make, steel, textiles etc, and we gave away our ship building and our fishing waters. Governments are using surveillance to protect themselves from our scrutiny of them, and putting the blame on the people for everything they have done wrong. I know this is simplistic but this is my perspective.

REPLY: I place most of the blame on Socialism. The unions became greedy and abused their power. New York City was once the major port. They chased all the shipping out to other ports who were more competitive. Today, no ships go to New York City. Then add the greed of politicians. Before World War II, yes the woman stayed home and raised the kids and managed the house. I knew European men who married Eastern European girls when the wall came down and they retained those old values and did not understand they were expected to go out and work. Taxes kept increasing so today, women lost the right to stay home and raise the kids. It now takes TWO incomes to do what one used to do prewar. In Europe, you pay unbelievable taxes not just on income, then 20% VAT on average. Taxes lower the standard of living for you will NEVER get your money’s worth in service in return.

As they say, the road to hell is paved with good intentions. If you create a network with social services, there will ALWAYS be people who game the system. Prisons have plenty of doctors for Medicare fraud in the USA submitting bills for people that did not exist.

Julius Caesar also confronted the abuse of welfare rolls in ancient Rome. He conducted a census and found that out of 320,000 pretend people getting free bread, only 150,000 were real.

“Caesar changed the old method of registering voters: he made
the City landlords help him to complete the list, street by street,
and reduced from 320,000 to 150,00 the number of
householders who might draw free grain. To do away with the
nuisance of having to summon everyone for enrolment
periodically, he made the praetors keep their register up to date
by replacing the names of the dead men with those of others
not yet listed.”

Therefore, people have been gaming the system for thousands of years. It is just part of human nature.

« Game of Thrones Ends with a Water Bottle
Fairy & Wishes »