Premiere of The Forum (Davos)

I attended the premiere of The Forum last night and got to meet those “elite” they spin such conspiracy theories about. Interestingly, the film will be released to the general public on the turning point of the ECM – January 18th, 2020. 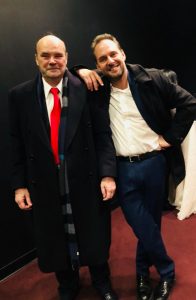 Most people have no idea that the World Economic Forum, which Nigel Farage said our World Economic Conference is the alternative, is more like a convention. They employ 800 people and they try to stand politically in between. It was founded by Klaus (Charles) Schwab.

Klaus’ vision was to create a forum where world leaders can meet each other and create a bond. The conspiracy theories that paint these meetings as the place where they decide what the world will do for the next year is really nonsense. These people are not in control of anything and as the world turned nuts in 2019, the leaders of Germany, France, and the US all declined to attend.

It began with the model being the Chamber of Commerce meeting in the United States. Klaus took it one step further and tried to bring business and government together. As events unfolded, it grew into an annual meeting which then people wanted to be seen as being apart of it.

The film is the first to show the behind the scenes of Davos.