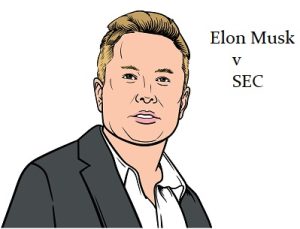 QUESTION: A rumor at the cocktail party was that you were selling a 50% stake for $1 billion to Elon Musk. He is big on artificial intelligence so it makes sense. You even both fought the SEC. After all, you did say you wanted to go public ASAP. So is there any truth to that rumor?

ANSWER: I guess that was a widely spread rumor since I have more than one email asking about Elon Musk. I have not spoken to Elon Musk. Yes, we have a few people making inquiries to buy-in, but I have not heard from Musk. Yes, I would consider it if they brought something to the table besides money. There is something much more important than money here.

When you have been a hedge fund manager trading billions, there is a culture shock you must get used to. If you cannot cope with that, you cannot do the job. You can deal in billions, or in my case advise even on trillion-dollar portfolios. Then you go out to dinner and you spend $100. There is a HUGE difference between the two worlds and it is at the core of even being able to do the job.

Most people cannot cope with the numbers because they think about a small mistake could lead to a major loss of billions. Once you think about what you are doing at that level, you cannot do the job. I explained this once to a journalist in Germany who asked me the question of how I could advise on such major portfolios. When I explained you have to separate the real world numbers from what you are doing she replied that she had interviewed top people in different fields who gave similar answers. She said she interviewed a top brain surgeon. Once he thought about what he was doing and the slightest mistake would mean the patient would be paralyzed for life, he could no longer do the job. Ironically, to actually do the job and help someone, you have to be dispassionate.

So it is not a question of money for me. It is a question of what they bring to the table. $1 billion or $100 million is really the same in the real world. It is far more than the average person could possibly spend. It would not change your lifestyle.

Hence, I am not inclined to simply sell 50% to the highest bidder. Money is not an issue. There is much more at stake to me than just money. We are not some IPO trying to raise cash to make something from scratch. In my case, the demand is rising exponentially and with that is the workload. I will not live forever. I too have an expiration date.

« Thank You for All The Birthday Wishes
The Solution »