Dallas Fed: Over Half of Americans Experienced Real Wage Declines This Year 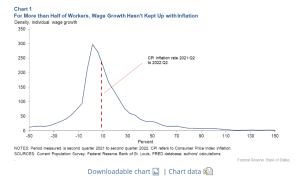 After examining real wages over the course of 12 months, the Dallas Fed found that 53.4% of all workers experienced real wage declines. Additional taxes under Biden have added to real wage decline as well. Peter C. Earle of the American Institute for Economic Research estimates that someone earning $70,000 annually now has $4,500 less in buying power in New York. “The bill for the Covid mitigation policies is due,” Earle said. “Record levels of fiscal and monetary policy expansion in the first half of 2020 are wrecking the purchasing power of the dollar. Thus even without a pay cut, wage earners are effectively earning less over time.”

The average median decline over the past 25 years has been 6.5% with real wage declines reaching between 5.7% to 6.8%. Inflation is simply too severe to compensate for any additional wages. The Fed continued to say: