Why is Socialism Dying?

QUESTION: Martin,
You repeatedly say that Socialism is dying. I live in a rural area of Oregon. As a personal observation, what I see around here is that more people, and especially the younger, are indeed moving TOWARD Socialism. The influence of the media is so strong that even people we know who advocate gun rights and the Constitution are willing to give up both to see Trump out of office and love the Bernie rhetoric of free everything. So, with the “dying” part, is it referring to more countries moving away from it than are moving toward it? We seem to be heading that direction, and rapidly at that.
JB

ANSWER: Socialism is dying because other people’s money is running out. Yes, we see that socialism is rising in its extreme actions from climate change being usurped to justify the confiscation of wealth and control of the economy. It is also prevalent in the rise of Bernie Sanders and Elizabeth Warren in the USA and the Labour Party in the UK.

This is the final rally of socialism before the crash. It is more akin to the final Phase Transition of a market as it makes its fatal high like the Dot.com Bubble, 1929, or Tokyo 1989.

So do not confuse the rise in the outward demands of socialism. We are running out of other people’s money and the unfunded promises will reach $400 trillion by 2032. There is no possible way to fund that without a crash & burn. 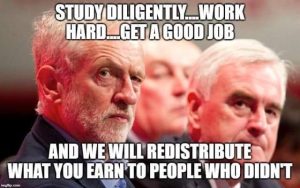 We also see this manifesting in the stark political divide between left and right. The left in Britain is saying the Prime Minister should be jailed if he carries out Brexit without a deal. The people voted for Brexit. They lost. That does not matter.

We are in the collapse of government and the socialistic promises since World War II are all coming due. Economically, this is a battle to the end. The left wants to confiscate all the wealth of the right. This is the end of the purpose of civilization and the beginning of pure tyranny.

I for one have no desire to live in a socialistic world of tyranny. I will most certainly leave and move to Asia rather than live under such tyranny.