Who is the Fool? Trump or Woodward? 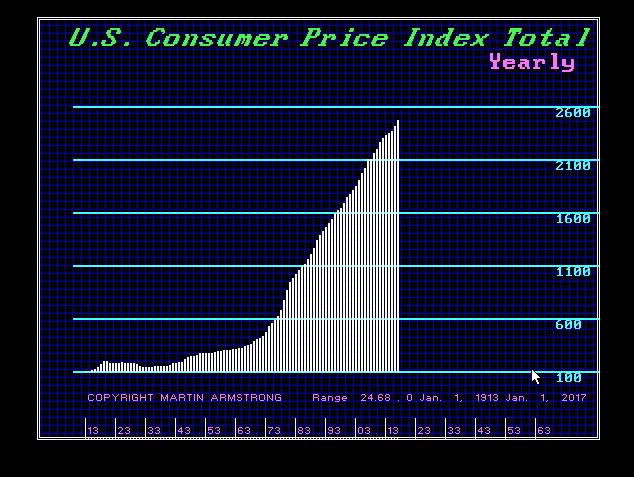 Cohn: “You don’t get to do it that way. We have huge deficits and they matter. The government doesn’t keep a balance sheet like that.”

Here is a chart of the US CPI not seasonally adjusted. It has begun its sharp advance since the Floating Rate System was adopted in 1971 with the fall of Bretton Woods. In spite of borrowing, inflation over time has actually advanced more aggressively than if we had just printed instead of borrowed.  Cohn has said that Woodward’s book “does not accurately portray” his experience of the White House. This calls into question was Woodward also deliberately writing this book to overthrow Trump?

This claimed quote of a discussion between Trump and Cohn demonstrates that someone is seriously out of touch with economics.  Actually, Trump is correct. Now we have Quartz joining the media calling Trump an idiot confirming they too are clueless about debt and printing. In fact, if you did just print the money and retired the debt, it would be DEFLATIONARY and not INFLATIONARY from the budget perspective because these people are clueless themselves about how the national debt works.

Before 1971, the debt could not be used as collateral for loans such as Savings Bonds. If you needed the money, you were forced to cash them in.  Under this system, it was logically less inflationary to borrow than to print because you were not increasing the money supply under traditional economic theory. However, post-1971, you buy T-Bills and post them as collateral to trade futures. The distinction between borrowing and printing has been turned upside down. A national debt is now worse than printing economically because it is money that now pays interest forever. Once debt became collateral, then it lost its distinction as separate from the money supply. Since there is no intention of ever paying off the national debt, we have a money supply that is outstanding which pays interest and blows the government budget into deeper and deeper deficits every year.

The truth is had we printed since 1971 instead of borrowing, there would be far less of an economic crisis compared to what we face today. If we simply printed to pay off the national debt, Social Security would suddenly become a Wealth Fund that actually made money instead of a Slush Fund for politicians. Now, Social Security can only invest 100% in US government debt and then the Fed lowers the interest rate to “stimulate” the economy and Social Security goes broke forcing higher taxes. Up to 70% of the national debt at times has been purely accumulated interest which never benefited anyone.  It competes with the private sector in what we call the “flight to quality” and it forms the bank reserves. What is never discussed is the fact that US debt is also the reserve currency of nations – not paper dollars. That means that the interest we pay is exported and it stimulates foreign economies – not domestic.

So who is crazy here? Trump or Woodward? To keep borrowing year after year is insane. To monetize the debt will be DEFLATIONARY from the perspective of government expenditure. In 2019, interest expenditures even at this low level of interest rates will EXCEED military expenditure. The cost to keep rolling the national debt will crowd out all social programs, result in a continued aggressive approach of government to confiscate the assets of innocent people, and it will raise taxes exponentially to retain its position of power. Sorry, Woodward – you are DEAD wrong here!!!!!!!!!!!!!!!!!!!!!!!!

Woodward is by no means qualified to criticize Trump on such an issue he clearly does not even understand. He is contributing to the brainwashing of society which will prevent us from even noticing we have a major crisis on hand. Trump should really address the nation and explain this problem very simply. I will be glad to supply the charts.