US Economy Soft – But Holding 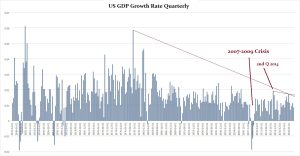 COMMENT: I find it interesting how the rest of the world is declining and Socrates forecast that the US economy would be only slightly weak going into January 2020. It is interesting how it picks up the major differences. They are blind to the trend. You bring together the world. Thank you for that and there will always be idiots who cannot comprehend the trend and think Warren Buffet is a great investor when he was just a buy and hold no different than Trump. They both made money simply because of the inflationary asset trend since 1985.

REPLY: The US economy was not poised for a major recession that everyone was forecasting because of the China trade dispute. It is softer, yes, but it is really holding up the entire world economy. The third quarter GDP was still up 0.8% whereas the prior quarter was up 1.1%. So yes, it was a slight decline. But we do not show a major economic decline in the USA. 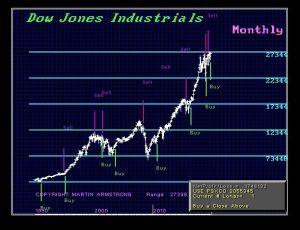 As long as stocks have been in a bull market since 1985, then buy and hold works. But they lose in downtrends. Everyone forgets that. The year 2008 was the worse year Buffett had in 44 years. Most people cannot hold through such declines. This is why institutions have used us for decades. They cannot buy and sell like short-term investors. They need to know when to flip a major portfolio. Truly smart value investors hedge. That eliminates the risk of having to declare bankruptcy during the declines.

« Who Earns the Money from Government Debt?
The Solution »