QUESTION: What do you make of Trump’s proposal to restrict US investment in China? Will this send the US economy into recession as everyone is saying?

ANSWER: I have never seen the press so anti-president in the history of this nation. Every possible thing they claim will destroy the US economy. The US trade with China will by no means send the US economy into a deep recession. However, blocking US investment into China would send the Chinese economy down even harder.

This style of analysis always reduces the future trend to one simple event. The markets and the world economy are far more complex than a single event. This is the entire problem with Western Analysis – it is always linear and never cyclical. This is the same problem as Global Warming. They see a 1-degree rise, project that out for 50 years, and then assume the trend will remain the same – linear analysis. They always project the future in this manner and NEVER look at the trends in history to learn what are the “real” possibilities from similar events.

What you must understand is they often call this type of struggle between the current superpower (Financial Capital of the World) and the rising power to take that title, the Thucydides Trap. This is named after the ancient Greek historian Thucydides who wrote about a war that devastated the two leading city-states of classical Greece – Sparta & Athens.

Thucydides explained: “It was the rise of Athens and the fear that this instilled in Sparta that made war inevitable.” 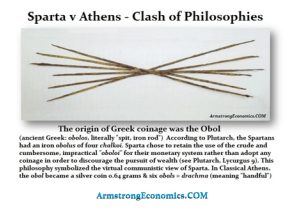 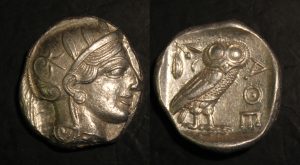 While Thucydides provided his opinion, there was another backdrop to this war which he did not cover. Looking at this from an economic issue, it was the ancient clash between Capitalism and Communism. Sparta never issued coins whereas the Athenian Owl coins became the international currency recognized even in barbarian regions.

Sparta was an ancient communist-style state. Athens, on the other hand, was the Financial Capital of the Ancient world. They developed banking, insurance, and commodity markets. Sparta saw Athens as a decadent threat so it was one of power and fundamental disagreement with the economic differences between the two city-states. But Sparta had the backing of other city-states which were forced to pay tribute (taxes) to Athens.

The Thucydides Trap is considered the violent aspect of the shift in the Financial Capital of the World. In most cases, the rivalry between the major power and the new contender has led to war. Only a few times the passing of the crown of the Financial Capital of the World changed hands without war such as the loss of that title from Britain to the United States. However, there was still war involved whereas Britain lost its economic status due to war in Europe primarily and then the rise of the Labour Party. It did not involve war with the United States.

Nonetheless, we are looking at the risk of a conflict between China and the United States as this struggle for power continues. The USA will lose the title to China. Our computer model will be correct on that. But it does not necessarily mean war will unfold. The West will fall because of the economic conflicts internally between the left and right as socialism is dying and all the promises cannot be funded. So we see this more as the case with Britain that it lost the title to the United States without a direct war between the two powers.