The Hatred of our Way of Life

A fundamental aspect of capitalism is the protection of property rights.  It appears that a part of the Marxist’s plan of attack is to kick the legs out from under capitalism.  Hence, the defunding of police.  If there is no protection then there are effectively no property rights.

Destroying businesses and creating an environment in which people with capital will not start new ones is an attempt to defeat capitalism and clear the way for a Marxist takeover.

The world is under attack.  This truly is a war.

The leftists can’t win elections honestly by promoting an evil ideology or the man-made global warming fraud.  They’ve gone to war using the fake pandemic as a Trojan horse to ride in on.

They’re fighting to stop the audits because they’re desperate to hold their ground. 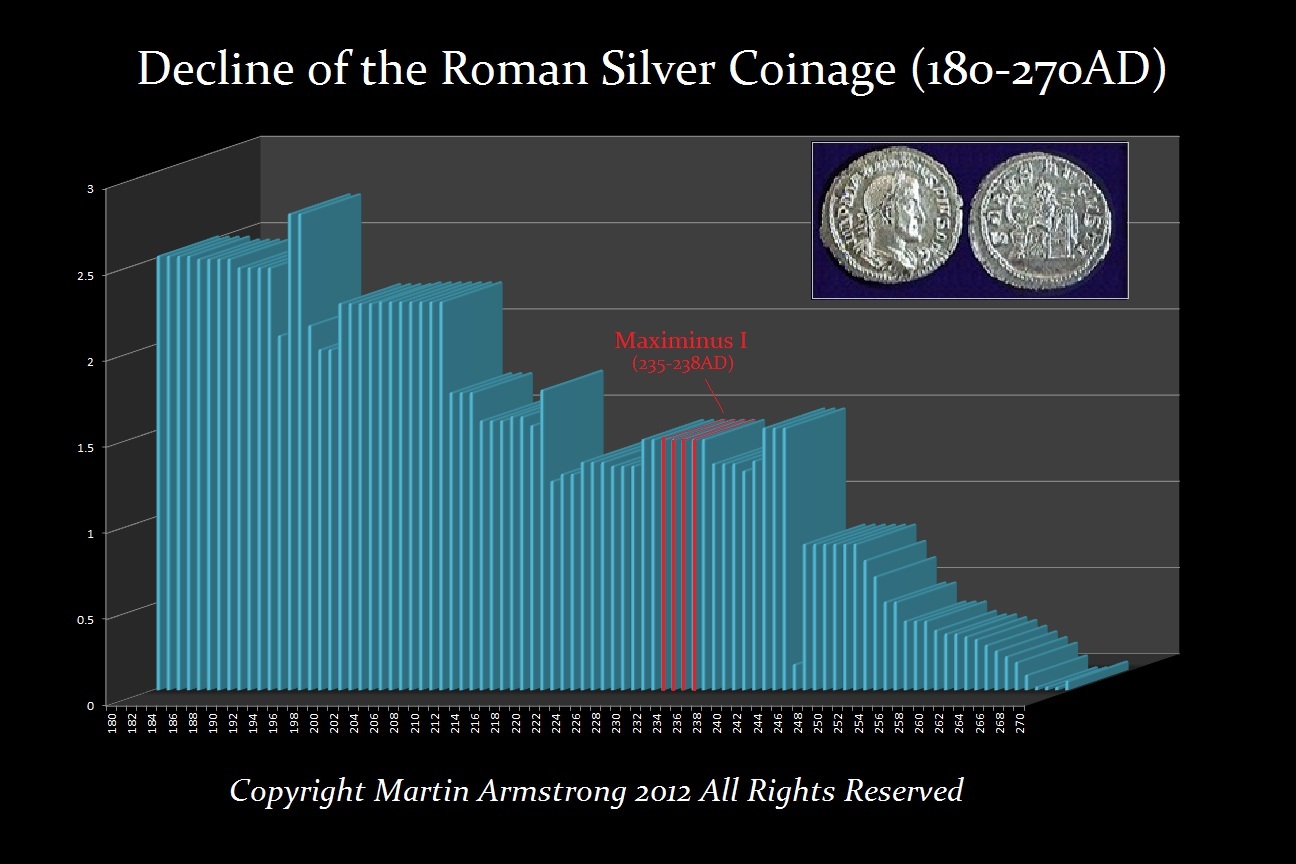 REPLY: They are doing everything possible to defeat our way of life. This reminds me of the emperor Maximinus I (235-238AD) who effectively declared all wealth in the country belonged to the state. He paid bribes to anyone who turned in another for hiding their wealth. Of course, the IRS already does exactly the same as Maximinus. They will pay you a portion of someone’s wealth if you report something where they are hiding their wealth someplace.

Once Maximinus wiped out small businesses in this manner, it led to the collapse in confidence in the economy, and from there on out commerce declined because businesses did not restart. This is the very same pattern despite the fact they do not call themselves EMPERORS – at least in public.

In this case, one Pi Cycle marked the bottom in the economy of Rome 237 to 268 = 31 years. It should take about 8.6 years to see the further economic decline from the start of this assault in 2019 using COVID. This will bring us to 2027 which is a major target on many of our models around the world. We are looking at a coordinated period of rising civil unrest which should accelerate post-2024 on an international level centered in Europe and North America – (Just look at the NYC election for Mayor).

This is simply caused by the collapse of confidence in government where 50% of the people question everything from the election results to the origin of COVID and the draconian lockdowns. The contemporary writers were at a loss to explain his actions. They put forth the claim that Maximinus was really a barbarian who hated the Roman way of life. He never entered Rome itself. Eventually, his own troops beheaded him and sent his head to the Senate.

Even over 4,000 people in Massachusetts have tested positive for COVID after being vaccinated. So why are only vaccinated people allowed into mass gatherings when it does not prevent the disease? Springsteen on Broadway announced that they will only allow people to attend who have been vaccinated ONLY with FDA-approved Moderna, Pfizer-BioNTech, and Johnson & Johnson. People vaccinated with AstraZeneca in Canada or Europe are not allowed to attend Broadway. Whenever I went to a Broadway play, the vast majority were tourists and most of them were from Europe. Guess I will not go to Broadway again. The lunatics are now in charge of the Big Asylum – no longer the Big Apple – worse initials have always been just BS.

People are starting to realize that the government has lied to them about everything. They are now event saying there are UFOs for the first time implying they have lied even about that for 75 years or more. Even on that topic, people conclude that there are really aliens visiting with UFOs, or these are UAPs which are entirely homegrown products of revolutionary and clandestine technological advances. Either way, the government is not telling the truth. Once trust in government fails, that is how and when nations fall and are buried in a common grave no matter what form they have professed.

Will Biden’s Tax Proposals and Pelosi’s new tax fairness committee to which she appointed only extreme lefts including AOC be the Maximinus event? Whose’ head will be put on a plate this time?

« DOWN UNDER & the Great Reset
Inflation – Systemic & Broad-Based? »