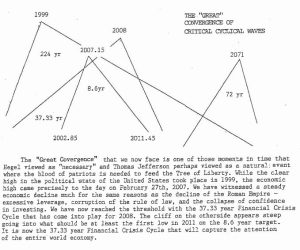 QUESTION: Mr. Armstrong; I attended your WEC in London back in 1997 when the Euro Commission took the entire back row. I remember your forecast that we would begin a period of a dramatic shift in the bond-equity correlation I believe you said would last for at least 23 years. That is nearly due. You were obviously correct and that did begin with the introduction of the euro in 1998. You were dead center between Barton Biggs and Steve Roach. Do you still see this inverse relationship flipping in 2021 as you forecast back then?

PS I left the bank….. and am now retired.

ANSWER: A lot of people I knew in the various banks back in the 1990s have left before the cards start to fall. I remember well. They were at Morgan Stanley back then and the two were polar opposites on their forecasts if I remember correctly. Barton Biggs argued that the world would be flooded by a glut of cheap Asian labor and Steve Roach was pointing to the Philips Curve warning that public deficits in the west would lead to a massive inflationary bonfire.

The Stock-Bond Correlation was the real debate. Our model was warning that stocks and bonds would indeed behave very differently which has materialized. Since 1998, stock prices and bond prices have been negatively correlated. In other words, when stock prices go up, bond prices go down and vice versa. Overall, stocks and bonds are indeed currently acting in opposition to each other on the macro-trend level. There has been a negative correction which some call the “flight to quality” when confidence collapses in the private sector, capital fled to the public sector. The broader 250-year relationship would argue that this is highly unusual. It is true that stocks and bonds moved up and down together throughout the 250 years prior to the 21st century.

The reason I delivered that forecast back then was the realization that government debt had entered a perpetual borrowing cycle ever since World War II. Moreover, the 224-year cycle of political change was due in 1999. That meant the political peak in government would take place at that time. The economic peak would by 2007. Both of those forecasts have been absolutely correct. Politics has declined steadily and ever since the 2007-2009 crash, interest rates have dropped sharply and there has been a contraction in inflation with a decline in economic growth.

In Its Just Time, I wrote: “While the clear high in the political state of the United States took place in 1999, the economic high came precisely to the day on February 27th, 2007. “

The flip in this relationship is still on target. Nothing requires any change to that forecast I delivered back in 1997. This is all being driven by the Sovereign Debt Crisis.