The 5 Factors Behind Capital Flows 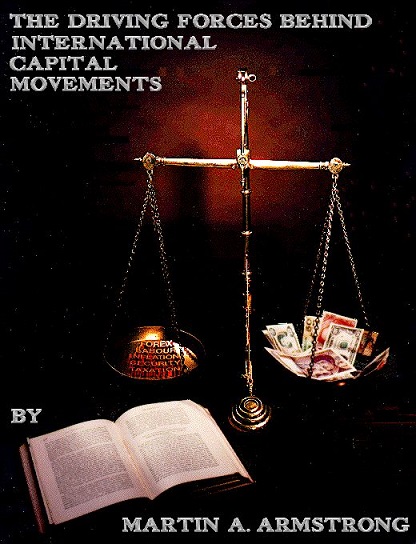 Well from myself and your family we thank you for sticking with us in this time as you have mentioned you could be doing other thing for yourself but like a brother you are sticking with us even when you know we will rise and repeat most likely, but in the same but different we hold hope for humanity. My question is can we get a large movement in confidence in currency without any major move in the physical instrument. Can the US dollar not have a hard drop before going back up on the basis that the confidence was effected more than the instrument it does not look like a linear relationship but more ying and yang where the ratio can be anywhere at any time but together are complete.Thanks Brother
Peace Out
LP

ANSWER: The driving forces behind capital flows center upon CONFIDENCE that manifests within five critical areas. Each area provides one major component which in turn has subdivisions. The 1987 Crash in the stock market took place because the G5 kept saying they wanted the dollar down by 40% to help trade. The morons failed to realize that if you lower the dollar by 40% to make you exports cheap to sell more, you simultaneously cheapen all assets. The Japanese had bought 33% of the US National Debt to try to easy trade friction, but then faced with a 40% loss on currency, they sold. This inexperience of those in government is just beyound contemplation. What the Plaza Accord was doing was trying to lower the value of the dollar to reduce the cost of American labour in international terms. This was the lethal combination of FOREX and LABOUR manipulation.

INFLATION is actually the major component of interest rates. The future value of money must incorporate a profit over the inflation rate in order to make a loan feasible. TAXATION is critical for capital will move like water to the place that is most advantageous for a real rate of return. You cannot tax investment at 90% and expect people to take a risk.

SECURITY is both economic (rule of law) as well as war. For example, capital fled to the USA from around the world during World War I and II. Therefore, economic justification does not always come into play when SECURITY issues rise to the top. The dollar is also the reserve currency because capital is not yet comfortable parking in Russian or Chinese debt and they are in US debt.