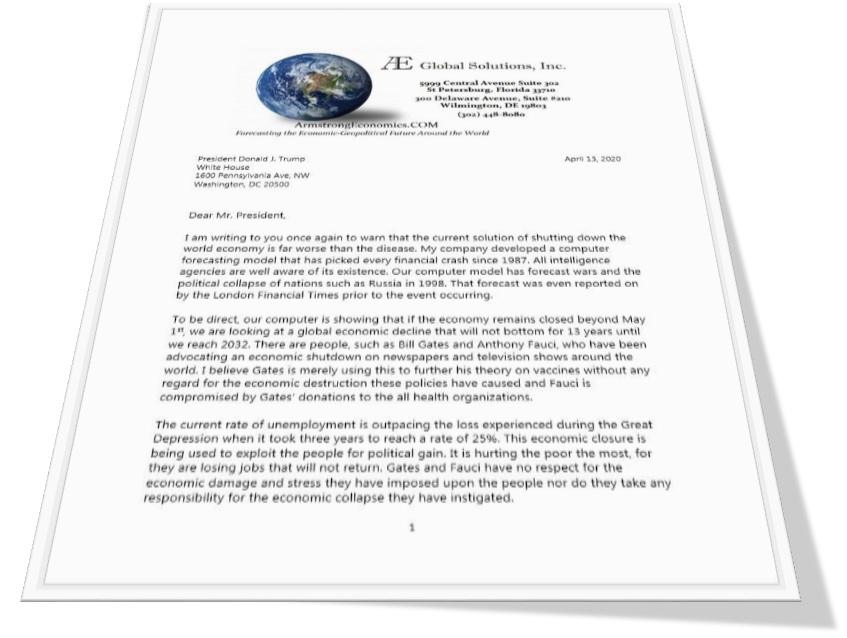 COMMENT: You are read by the very most influential people and institutions in the world. You have made a major difference. The pressure you have put on governments worldwide has been incredible. I know your letters to Trump have circulated among many parliaments internationally. I can personally attest to that. Your warning of a great depression into 2032 if everything remained closed after May 1st has been an important influence. I am one in such a position to confirm that.

Germany is bucking the trend and Merkel has said that stores of less than 800 square meters may reopen next week. The same is now happening even in New Zealand. We all know which politicians have been quoting your letters verbatim. If anyone deserves the Nobel Peace Prize it is you, but I also know you have no respect for such things after Obama was handed one for just winning the election.

You have the courage of a lion, and the wisdom of the ages thanks to Socrates. Keep up the good fight.

REPLY: Thank you very much, but I have not done this alone. My simple writing a letter that is private I do not believe it would have the same impact as making it public in a crisis like this. The fact that thousands of people have helped to repost it everywhere and to send copies to every politician around the globe they know is the key to success. It has been a tremendous help with everyone forwarding those letters to all the various parliaments and opposition parties in some countries.

Nevertheless, we have not won. Yes, there has been some push-back. New Zealand has had to blink, and the conservatives have pushed back in Germany forcing Merkel to announce that shops of up to 800 square metres in size, as well as bookshops, bike stores, and car dealerships, will open again from this coming Monday while just about everything else by May 4th.

I cannot thank everyone enough. We are all in this fight. We are fighting for not just us, but our posterity. This is not the time to lay down and surrender while we still cling to the last dying embers of freedom.

We need to send the Commerce Clause to every newspaper, media outlet, and politician in the United States. We must fight back now. We have not won this battle yet.