Yes, the political situation in our country is out of control and you are right, there is no turning back.

But this truly pales in comparison to what is happening in the financial markets today. It looks to me like the Fed has aided and abetted this ridiculous surge in stock prices. The phase we are in started back in early 2016 when we were plumbing new lows. The blinked. Then as they tried to raise rates in 2018, the marked puked and once again, they blinked. Less than a year later we have the REPO Crisis which you have discussed many times. At your WEC in Orlando, you stated one of the problems today is “the paradox of solution”, which I found brilliant…every solution to a crisis produces an even worse result later. Then you mentioned this: That politicians in office today have even less experience, that those in the know are leaving letting those in charge impose solutions that don’t work.

Marty, all of this is adding up to those in charge of debt and rates, the Fed, now being incapable of dealing with reality. To me, it’s worse than politics. The markets seem to be telegraphing an inflation ahead and a collapse in debt markets at some point. But you have always used the 1920’s as a sort of analogue to our times, claiming at some point the Fed will be forced to raise rates, realizing too late they have goosed markets and are now losing control. I just don’t see it. Nothing in the current makeup of the Fed indicates they understand the issues. Not them, not anyone in government will let weak companies fail, banks even less. There is no will in this country anymore. No one can take the pain. The Fed seems like they want to bail out everyone.

ANSWER: I understand that the traditional view states that cheap money means people will borrow to buy stocks. That entire theory is very naive. However, when we actually look at the data, that market myth evaporates in sunlight. We have been making lower highs in broker loans, which shows what I have been saying all along — this is the MOST Hated Bull Market in History! We are nowhere close to the highs of 2007. 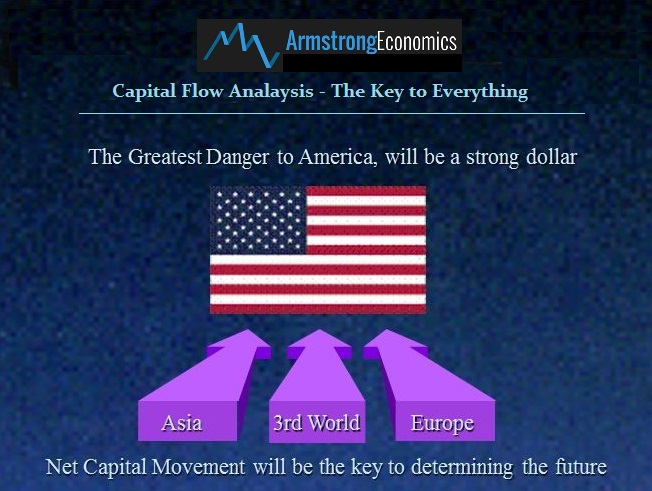 The market has risen NOT because of cheap rates but on a capital flight from just about everywhere into the US dollar. The Fed has been baffled because they initially were looking at that market myth. But they see there is no validity to that theory. They are focused on the problem that negative interest rates in Europe and Japan have created. The slightest uptick will be devastating to those economies, not to mention the losses on the outstanding long-term bonds which negative yields.

It is by no means creating future inflation. What it is creating is a future collapse in confidence with respect to the governments actually being in charge of the economy. This is why I wrote that book, “Manipulating the World Economy.” This is all coming to an end. We are looking at, not inflation, but a massive shift in investment strategy from public to private. The Fed cannot raise interest rates to prevent a rally without undermining the sovereign debt globally. The game has changed. The politicians will brow-beat the Fed because the Democrats are really Marxists and will scream at the Fed because their low rates are benefiting the rich. They are beyond brain-dead. The politicians are incapable of understanding the problem and they have become so confrontational that we can guarantee there will be no understanding reached because they are absorbed by this class warfare.

« “Economics” – What Does the Term Imply?
Online v Brick & Mortar »