Difference Between Hyperinflation and Currency Inflation 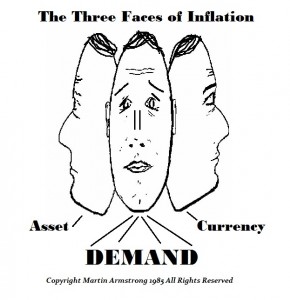 ANSWER: Asset inflation is typically a reflection of a decline in the value of the currency, but this can be 50% over the course of one to two years. Hyperinflation typically occurs when confidence in the government itself completely collapses. This is usually in a peripheral economy or often in times of war or major domestic revolution, as was the case with the Continental Currency in the United States and the Assignats of the Revolutionary government in France. Asset inflation can be also caused by an investment boom concentrated within a single sector such as the Dot.com Bubble. The typical definition of hyperinflation is when prices rise by more than 50% per month over a period of time.

Then there is DEMAND inflation, which is typically one of two aspects. It can come in the form of a hot item like Pet Rocks, Cabbage Patch Dolls, etc. The second aspect is a shortage of something such as wheat or corn and the demand forces the price to rise.